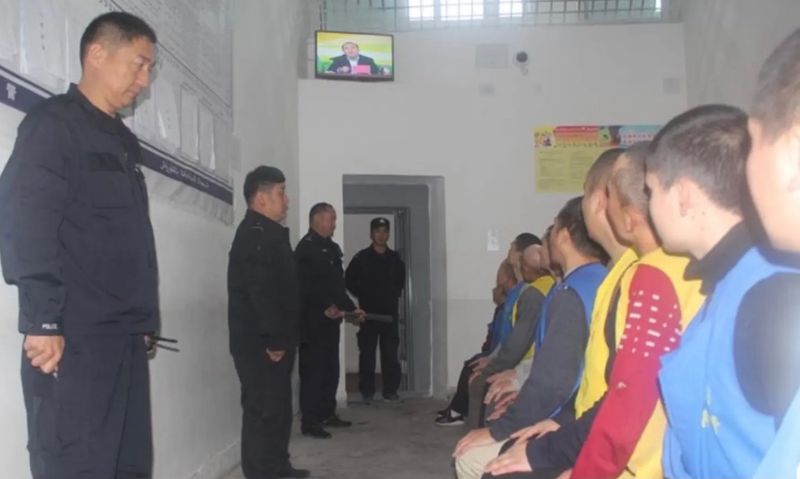 The files, published by the Washington-based International Consortium of Investigative Journalists, also reveal a chain of command over the camps in the western region of Xinjiang leading all the way to Xi Jinping, the Chinese president.

The files have been made public just as Michelle Bachelet, the United Nations high commissioner for human rights, began a visit to Xinjiang on Monday. They contain the first images of the inside of the camps, where up to 1 million people are thought to have been detained.

The photos include images of Uighurs chained by military officials carrying batons and riot shields, and headshots of up to 5000 Uighurs detained for minor infractions.

One man was jailed for almost 17 years for growing an Islamic-style beard. Others were imprisoned for not using their mobile phones enough, which makes it difficult for China’s surveillance state to track them.

The files outline a police protocol that researchers said “describes the routine use of armed officers in all areas of the camps, the positioning of machine guns and sniper rifles in the watchtowers and the existence of a shoot-to-kill policy for those trying to escape”.

The images are at odds with Chinese claims that Uighurs entered the camps as “schools that help people free themselves from extremism”. In one photo, officials dressed in military uniform point their guns at a prisoner kneeling at the feet of people dressed in riot gear. Another shows a line of women in yellow uniforms as officials stand close by.

Dr Adrian Zenz, a scholar at the US-based Victims of Communism Memorial Foundation, who has been sanctioned by China over his research on Uighurs, said the material “blows apart the Chinese propaganda veneer”.

“We have confidential documents. We have speech transcripts where leaders freely talk about what they really think. We have spreadsheets. We have images. It’s unprecedented,” he told the BBC.

“The material is unredacted, it’s raw, it’s unmitigated, it’s diverse. We have everything.” He obtained the files from a hacker who accessed Chinese police networks in Xinjiang, then shared the data with news outlets.

The files also list the reasons behind people’s imprisonment, including occasions where people were punished for “crimes” that occurred decades ago.

In one case, a man was detained for 10 years after he allegedly “studied Islamic scripture with his grandmother” for a few days in 2010.

Others were jailed for up to 10 years for not using mobile devices enough. There are more than 100 instances of “phone has run out of credit” included on a list of crimes, taken as a sign of avoiding digital surveillance.

The leaks are a “watershed moment” for the Uighur crisis, Rayhan Asat, a Yale human rights lawyer said.

China reacted angrily, accusing the US, Britain and other foreign powers of sabotaging the trip to Xinjiang by the UN official for human rights.

Inside the files are transcripts of speeches revealing the beliefs behind the policies, as well as evidence of where responsibility for the vast programme lies. Zhao Kezhi, China’s minister for public security, said in one speech that at least 2 million people in Xinjiang were holders of “extremist thought”.

The speech refers to Xi Jinping, praising him for the creation of new facilities to manage the detainees.

Another speech is from Chen Quanguo, until recently Xinjiang’s Communist Party secretary, in 2017. “For some, even five years re-education may not be enough ... Once they are let out, problems will reappear.”

Research by Dr Zen confirms that in one county at least 22,762 residents were either in a camp or prison between 2017 and 2018. This is about 12 per cent of the population. Applied to the rest of Xinjiang, it would mean 1.2 million Uighur and other Turkic minority adults were imprisoned.

The data finishes in 2018. Alongside other news outlets, the BBC was able to verify significant parts of the files.

Get a note directly from our foreign correspondents on what’s making headlines around the world. Sign up for the weekly What in the World newsletter here.