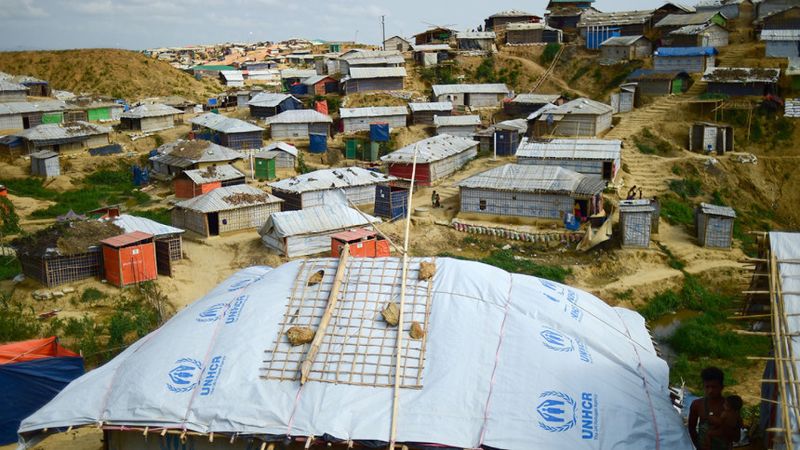 The three successive murders of Rohingyas last week and the recovery of a sophisticated M16 assault rifle from a Rohingya camp in Cox's Bazar Thursday night have exposed the deteriorating law and order in the refugee shelters.

The Armed Police Battalion (APBn) recovered the rifle and 491 bullets from a camp in Ukhiya. Law enforcers said this was the first recovery of an automatic rifle in one of the camps where about one million Rohingyas have been sheltered.

Experts said the recovery of such a weapon gives the indication that law and order in the camps can turn volatile anytime.

"We did not recover such a modern weapon in the camp area earlier. We had information that this weapon will enter the camp. We intercepted it," Mohammad Sihab Kaiser Khan, commanding officer of 8 APBn in Ukhiya, told The Daily Star yesterday.

He said local weapons and some small arms were found in the camps previously, but this type of automatic weapons is very dangerous.

Asked how the weapon entered the camp, Sihab said this would be known once the investigation into the incident is completed.

In the last one week, at least three Rohingyas, including a so-called Arsa leader, were killed in Ukhiya's Kutupalong camp.

The presence of Arsa operatives in the country has widely been debated as Rohingyas and security experts believe they are members of the Myanmarese insurgent group in Cox's Bazar camps.

However, the government has always maintained that this group does not exist in Bangladesh and that some criminals might have falsely identified themselves as Arsa operatives to intimidate the Rohingyas.

More than 100 killings have taken place in Rohingya camps since the forcibly displaced Myanmar nationals arrived in Bangladesh in 2017, according to law enforcement agencies.

Shahab Enam Khan, professor of international relations at Jahangirnagar University, said the presence of arms like M16 clearly gives the hint that the security situation in and around the Rohingya camps can become volatile anytime.

"The issue of inter-agency cooperation and collaborative monitoring of the security situation should be ensured not only by the law enforcement agencies, but also by the intelligence agencies."

Shahab, who monitors the Rohingya situation, said repatriation must be the priority and any violence will only delay the repatriation and international cooperation in this regard.

"If required, the possibility of reengaging the armed forces [in security issues] should be explored," he said.

Speaking to The Daily Star on condition of anonymity, a member of the CTTC arms enforcement team said M16 rifle is a sophisticated weapon and an updated version of M-4, which is used by SWAT for combat operations.

It can be operated in two modes -- auto and burst. In auto mode, the weapon fires a single bullet at a time while in burst mode it fires randomly with just a press on the trigger, he added.