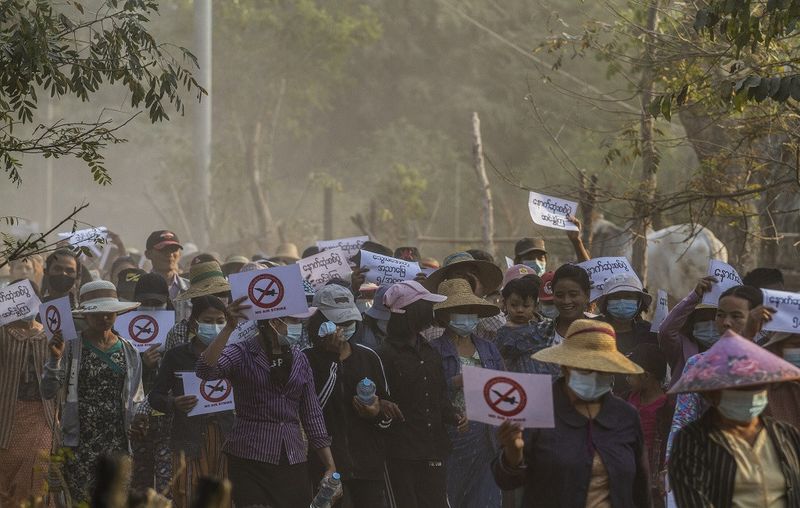 Myanmar's military junta is to take part in hearings at the top United Nations court in The Hague next week despite a complaint from political opponents that this could give it international recognition without legal standing.

The hearings will address a jurisdictional dispute arising from Gambia's claim filed in 2019 at the International Court of Justice (ICJ), also known as the World Court, accusing Myanmar of genocide against its minority Muslim Rohingya population.

More than 730,000 Rohingya fled Myanmar after a military-led crackdown in 2017 and were forced into squalid camps across the border in Bangladesh. UN investigators concluded that the military campaign had been executed with "genocidal intent."

Before the fall of Aung San Suu Kyi's civilian government to a military coup a year ago, she disputed the genocide allegations against the military brought by Gambia, a mainly Muslim African country backed in this case by the 57-nation Organization for Islamic Cooperation.

Now, junta representatives are expected to attend virtual hearings at the ICJ - which handles disputes between states - addressing preliminary objections to jurisdiction filed by Myanmar in January 2021. Hearings are set to begin on Monday.

A number of UN bodies have invited junta representatives to meetings even though the Myanmar military has no formal standing at United Nations headquarters in New York. The UN General Assembly's credentials committee decided in December to defer a decision on the matter. read more.

In the meantime, the credentials committee has allowed Kyaw Moe Tun, representative of the government toppled in the Feb. 1, 2021 military coup, to remain in post.

Members of the National Unity Government (NUG), a parallel administration including deposed lawmakers in exile, said earlier this week that Kyaw Moe Tun, whom it has also named to represent it in The Hague, is "the "only person authorized to engage with the court on behalf of Myanmar."

"The junta is not the government of Myanmar," said Christopher Sidoti, a human rights lawyer and former member of the UN fact-finding mission on Myanmar.

"The junta has neither the authority nor the ability to act as the government of Myanmar at home or abroad. But by appearing before the ICJ, that is exactly what it will be attempting to do," Sidoti told Reuters.

"The Myanmar people have clearly rejected the junta, making it clear the military does not represent them," said Tun Khin, president of the Burmese Rohingya Organization UK, alluding to a series of popular protests against military rule.

"All in the international community, including ICJ, should hear this, and not lend any form of legitimacy to the junta."

The ICJ has yet to consider the merits of the genocide accusation. Suu Kyi in December 2019 called on the World Court to dismiss Gambia's claim, denying genocide and saying the ICJ should not have jurisdiction. But the NUG said earlier this month it accepted ICJ jurisdiction to hear the allegations.

A source at the Hague court told Reuters that the registered representatives for Myanmar were junta-appointed Ko Ko Hlaing, its envoy for international coordination, and Myanmar Union Attorney General Thida Oo, who will head an eight-member legal team for the hearings.

Both officials, who are on a US Treasury sanctions list, would replace Suu Kyi, who after the coup was sentenced to six years in prison and faces a combined maximum sentence of another 150 years in a dozen other cases brought by the military.

The ICJ declined to answer Reuters' questions about how it decides who can be accredited as state representatives in cases where a country's government is contested, referring to its handbook. Its rules state only that communications about representatives come from a foreign ministry or embassy.

"The junta’s presence at the hearings doesn’t impart legitimacy or validate the representation of the military before the United Nations," said Shayna Bauchner, a researcher for New York-based Human Rights Watch.

She said the more important focus should be on justice being served over atrocities against the Rohingya in Myanmar.