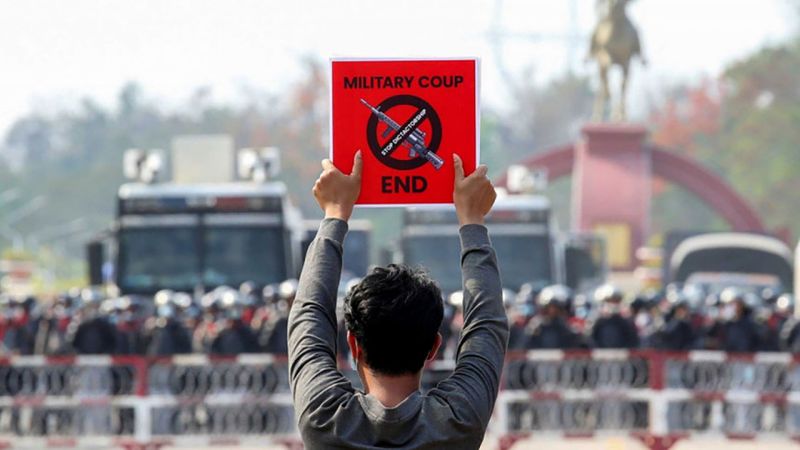 The European Council today adopted a fourth round of sanctions given the continuing grave situation and intensifying human rights violations in Myanmar.

Myanmar military took control of the country, ousting the elected government on 1 February 2021. As of now, about 1,500 civilians were killed and hundreds of thousands were displaced in a situation that is close to a civil war.

Earlier in 2017, about 750,000 Rohingyas took shelter in Bangladesh, escaping a brutal military crackdown against them in the Rakhine State that the UN investigators dubbed having "genocidal intent". Myanmar is facing a genocide case at the International Court of Justice.

The new sanctions were imposed on 22 persons and four entities, including government ministers, a member of the State Administrative Council and members of the Union Election Commission, as well as high-ranking members of the Myanmar Armed Forces (Tatmadaw), according to a statement of the European Council today.

The sanctioned entities are either state-owned companies providing substantive resources to the Tatmadaw, or private companies closely connected to the Tatmadaw's top leadership. These companies are Htoo Group, IGE (International Group of Entrepreneurs), Mining Enterprise 1 (ME 1) and Myanma Oil and Gas Enterprise (MOGE).

Restrictive measures now apply to a total of 65 individuals and 10 entities and include an asset freeze and a prohibition from making funds available to the listed individuals and entities.

In addition, a travel ban applicable to the listed persons prevents them from entering or transiting through EU territory.

The existing EU restrictions will also remain in place. These comprise an embargo on arms and equipment that can be used for internal repression, an export ban on dual-use goods for use by the military and border guard police, export restrictions on equipment for monitoring communications that could be used for internal repression, and a prohibition on military training for and military cooperation with the military.

The restrictive measures came in addition to the withholding of EU financial assistance directly going to the government and the freezing of all EU assistance that may be seen as legitimising the junta.

"The European Union is deeply concerned by the continuing escalation of violence in Myanmar and the evolution towards a protracted conflict with regional implications. Since the military coup, the situation has continuously and gravely deteriorated," the statement said.

As a matter of priority, the EU reiterated its calls for an immediate cessation of all hostilities, and an end to the disproportionate use of force and the state of emergency.

"The European Union will continue to provide humanitarian assistance, following the principles of humanity, neutrality, impartiality and independence. The EU reiterates its call for the full and immediate respect of international humanitarian law," read the statement.