China seeks to dominate Bay of Bengal through Myanmar ports 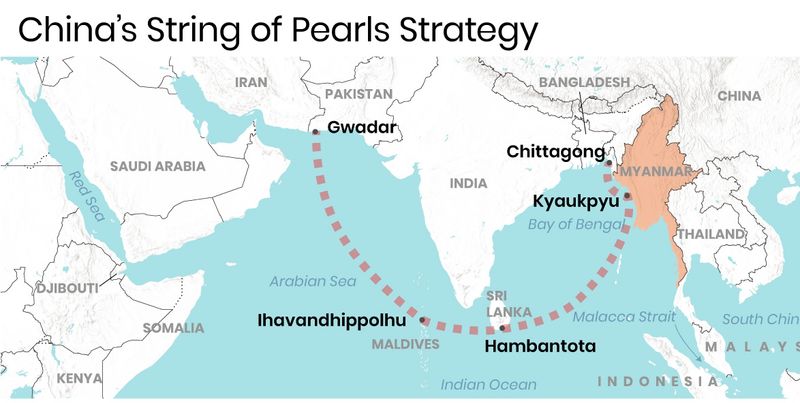 The Economic Times/ by By Dipanjan Roy Chaudhury

China is seeking to dominate Indian Ocean Region after establishing ports at Gwadar and Hambantota and will soon have access to the Indian Ocean from ports in Myanmar.


China has successfully conducted a cargo run from Myanmar’s Yangon Port all the way to China’s Yunnan Province. The Chinese dream got boost by the China-Myanmar Economic Corridor (CMEC), a portion of the Belt and Road Initiative that runs from Yunnan Province to the Indian Ocean port of Kyaukphyu in western Myanmar.

CMEC is the umbrella for a host of infrastructure projects designed to link China’s Yunnan province to Myanmar’s western coast and continues to be a top priority for both sides.

CMEC will enable China’s navy, the People’s Liberation Army Navy (PLAN), to monitor India in the Bay of Bengal. It will also allow China’s oil shipments to avoid the Strait of Malacca. The USA and India have a shared interest in preventing the PLAN from gaining access to the Indian Ocean.

By 2030, the PLAN will have 67 new major surface ships and 12 new nuclear-powered submarines, enough to control the Indian Ocean, according to US Naval Intelligence. China is growing its navy so that it can control seas by 2030 and displace the US Navy as the world’s most powerful navy by 2049.

There are reports that as many as 125 foreign vessels can be present at any given time in the Indian Ocean, the most since World War II. Speaking during his first press conference in December 2021, India’s Chief of Naval Staff Admiral R Hari Kumar said that the Indian navy might be tracking up to three PLAN ships at any given moment.

Preventing China from gaining control of the Indian Ocean may necessitate a new Indian Ocean policy by key players.