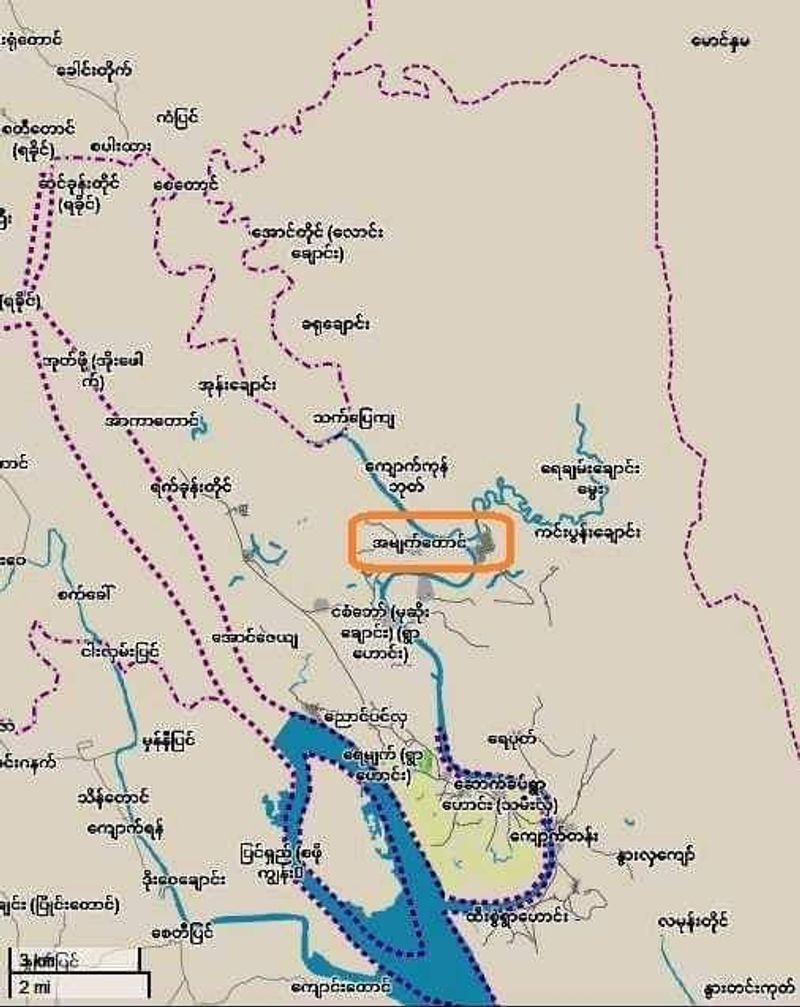 A local resident from Amyat  Taung village said “ The Myanmar Army marched on from mountain ranges where both sides are fighting which is about a mile from the village. The fighting took about half an hour. And they came from there and opened fire the village. The villagers fear run away. Then, they set fire the villages from every corner. We daren’t go and see and don’t know how many houses were destroyed."

There are about 206 houses in the village about 900 local villagers are residing there.

Daw Khin Saw Wai, Member of Pyithu Hluttaw said that the villagers had already alerted about the incident including the fighting on the ranges of Wanlarkaung and Kharinntaung mountains.

The MP added that, "A villager has contacted her that the military troops entered and fired the village. When the villagers fleet, they set on fire all the houses in the village. About 10 houses were believed to have been gone up in smoke. Only a handful of villagers remained in the village as they witnessed the whole situation. Besides, they had told that military fired the big weapons around the village."

U Khat Chue, the village leader said, "Myanmar Army burn on fire our houses. All the 44 houses were destroyed. I don’t know why the Myanmar did that. I saw about fifty soldiers and half of them are entering the village including two Bengali. They start setting the fire at around eleven o’clock. Our villagers have been sheltering in Done Thein Temple of Buthidaung for four months."

The Alay Chaung village has more than 40 houses and about 200 populations displaced the village and have sheltered in Done Thein camp due to the clashes for four months.

U Aung Thaung Shwe, one of the MPs of of Pyithu Hluttaw told Narinjara News that the fire setting news is confirmed in accordance with the villagers.

He added, “ The fire setting by military is correct the villagers said. This is a minority Kha Mi village near Tharark Pyin village. The villagers becoming victims is unacceptable. They are innocent. They are not unhappy with this.”

Asking about the setting fire on the villages, both spokesperson of Military Information, Senior Brigadiers Win Zaw Oo denied the incident and said, “The village called Amyat Taung is situated at the west of Ra Soe Chaung. Our troops are not there. So, it is not us. There is no fighting there and the clashes occurred in Yourr Chaung. Since, there is fighting both sides are responsible for that the bomb could hit the houses of the village. I haven’t received this news yet. But, it is impossible to set fire on."

A villager said that although, the military operation unit has left out the village and the whole village remained with full of smoke.