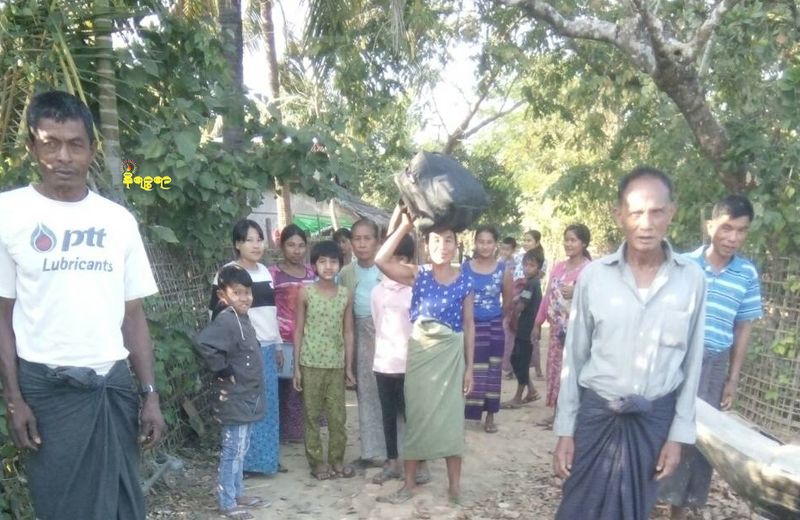 Thousands of villagers from two townships namely Buthidaung and Rathidaung, located at the northern part of Arakan State in western Myanmar, were rendered homeless as they had to flee their villages with incidents of fierce fighting between Myanmar Army personnel and Arakan Army (AA) members broke out in their localities.

A former village administrator of (Pa) Owe Thayma informed that the gun-fight between the two armed parties broke out at 1 pm and lasted for three hours. Both sides used heavy guns in the encounter. Scared villagers soon fled their localities, he added.

Presently, most of the villagers are taking temporary shelter at Zaydi Byint, Setkaw, Ngwe Daung villages under Buthidaung Township.

Prain Taw locality at the northern part Rathidaung Township also witnessed the clash on 12 January. Earlier the security forces used two helicopters and a fighter jet to target AA members, who were stationing in the mountain range near the village.

“On 11 January two helicopters and a fighter jet were used by the security forces. The attack on AA members lasted for 30 minutes.  Next day, AA members challenged the security personnel and heavy gun-fights followed. Then the villagers decided to leave their residences, said an old villager.

There are over one lakh IDPs in various camps of Arakan and they are allegedly facing the acute shortage of food items, drinking water, medicine etc.