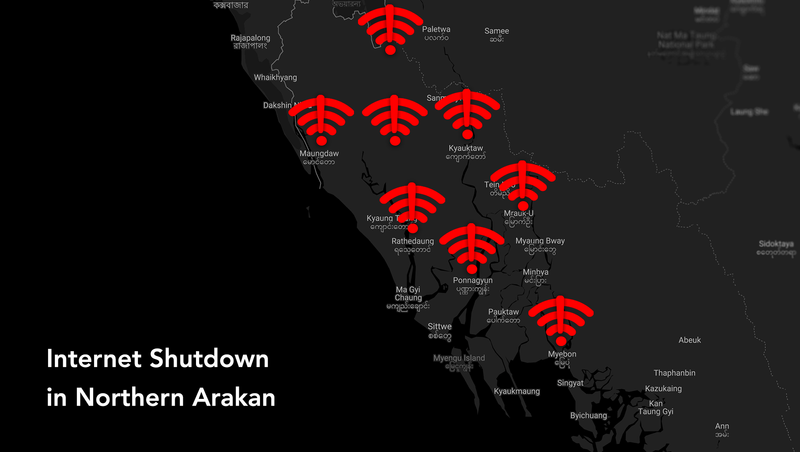 The Mrauk-U Youth Association (MUYA) has issued a statement calling for the government to upgrade to 4G in eight townships, seven townships in Rakhine State and Paletwa in Chin State, as the coronavirus spreads.  While the government has resumed internet services, it still cannot be used.

In a statement issued on 21 August, the MUYA has called on the Union Government to upgrade the internet to 4G (LTE) as soon as possible. The government reopened the internet in eight townships, seven in Rakhine State and Paletwa in Chin State, on August 1, 2020, one year and 20 days after shutting down services. The internet is re-enabled as 2G (E) level internet, and is unusable.

Moe Zaw, a member of the Central Executive Committee of the Mrauk-U Youth Association (MUYA), said, “To It’s just what we were asking before, to turn on the internet. The government has permitted 2G (E) level, but that cannot be used in Mrauk-U. And now there is in an emergency with COVID-19. Without information, the spread of the disease is likely to increase in Mrauk-U. Even now, there are people who do not even know if they have come into contact with a positive patient in Mrauk-U. That is why we making this request.”

Additionally, more and more people are unaware of the do's and don'ts concerning COVID-19 as issued by the Ministry of Health.

"In addition, people will be unaware of the guidelines issued by the Ministry of Health, unaware of the dos and don’t’, people may gather together in crowds" he said. “And if they do not know about the virus, they won’t use masks. Now that the internet is 2G and is unusable, we are worried that the disease will spread when the information is not available at all," Moe Zaw said.

The statement added that the Union Government needs to be compassionate and provide information on the epidemic as soon as possible, including those in Mrauk-U Township who do not have full access to the internet.

At present, 53 people have been infected in covid-19 in Rakhine in the week from August 16 to August 22, according to the Ministry of Health.