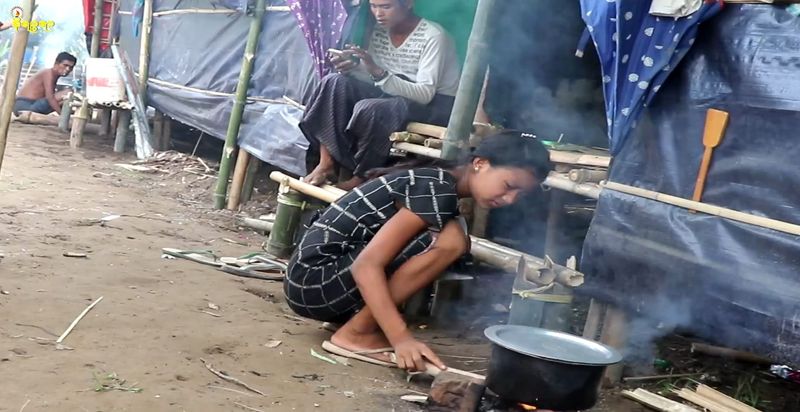 Food shortages have been reported in camps for displaced persons in Minbya Townships, during an increasingly difficult time due to the corona virus.

Hla Thein Aung, a state assemblyman for Minbya Township, said, “since yesterday morning when they started to conduct checks for those entering and leaving, there has been a shortage of food in the camps. I was informed that they were having problems, ”he told Narinjara.

"They said that the government's disaster relief team does not provide regular monthly assistance. They say the rice is completely used up. Yesterday morning, I called the township administrator and asked him if the disaster relief team could provide any rice or anything , but he didn’t answer. When we asked if we could get rice donations from the town, he didn’t answer. Rice donations in the town can be a problem without permission,” said Hla Thein Aung.

There are seven camps in Minbya Township, two in the Minbya town as well as Thay Kan, Na Ran, Ann Thar, Pan Myaung and Wa Taung.  The camps provide shelter to around 2,000 people.

It has been about a month since the NGOs contacted the village administrator in charge of the camp to raise the matter of the food shortage. Civil society groups say they are unable to deliver the assistance due to COVID-19 resulting in rice shortages.

"There are 1,103 people in the camps," the village administrator said.

“The people there come from Hpar Pyo, Seiktara, Tha Lu Chaung, Oh Poe Taung, Let Koke. The World Food Program used to provide rice, beans, oil and salt. The last time they provided this was on 14th of July and now it is 27th August,  it's been over a month. No supplies have arrived yet and there’s a shortage of food. To this day, the people in the camps are in dire straits and worried sick because of the lack of food,” he said.

“If food does not arrive within the next two days, there will be big problems”, he warned.

“It’s impossible to know who to contact, should we raise this with at the township level? Charities are also finding it difficult to come to because of COVID. Everyone is suffering”.