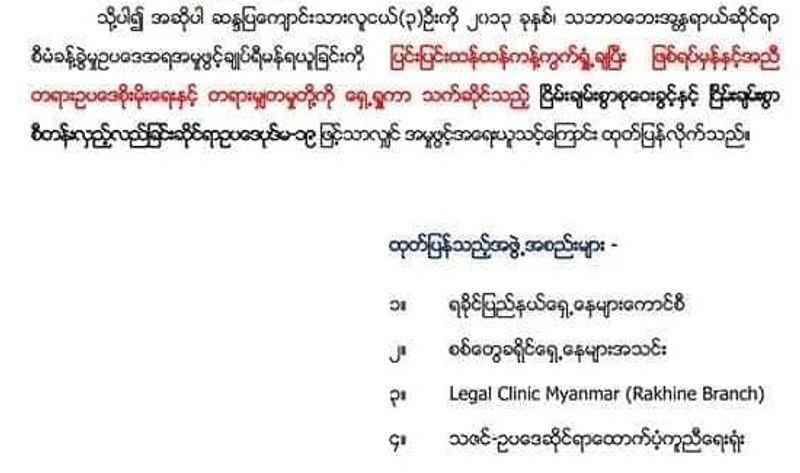 At least four Rakhine-based lawyer’s organizations on Sunday condemned the authority over prosecution of three students under the disaster management acts in association with the peaceful assembly & procession laws.

Rakhine State Bar Council, Sittwe District Lawyers Association, Legal Clinic Myanmar (Rakhine branch) and Thazin Legal Aid in a statement argued  that the Disaster Management Act (25/29) should not be applicable against the students, who demonstrated in front of Rakhine State government buildings.

Mentionable is that three protesters representing Arakan Student’s Union (ASU) staged the  protest demonstration on 9 September last in Sittwe to raise voices against the government persecutions over the civilians in Rakhine State.

Ko Toe Toe Aung, Kyaw Naing Htay And U Than Naing, who are members the steering committee to ASU, also raised some posters saying ‘No Bloody Government’, ‘No Murder Army’, ‘Lack of Trust in Rakhine State Government’,  ‘Stand with the Rakhine People’, etc.

The police quickly arrested them from the spot and charged under both the Disaster Management Act (25/29)  and the peaceful Assembly and Procession Act (19). They were produced in Sittwe township court on 10 September and sent to two weeks remand.

The disaster management acts have the provision for a maximum three years of imprisonment. Moreover, the detainees cannot apply for bails here, where as that is applicable in peaceful assembly & procession acts. It is assumed that the authority wanted to punish the agitating students and hence the police were asked to charge them under the disaster management acts. Otherwise, the activities of those students
have nothing to do with the concerned laws.

The lawyers’  organizations also pointed out that similar demonstrations were organized on 10 September in Mandalay too, but all the 13 participating students were charged under the peaceful procession laws only. The practicing lawyers asserted that the concernact over the three protesting students is a serious violation of the rule of law & justice (in Myanmar).

Daw Mya Thuzar, attorney-general of Legal Clinic Myanmar (Rakhine branch) stated that the first point is to focus on the rule of law and justice. The second point is to do justice to the arrested students.

“Students are not protesting in Rakhine State alone. Elsewhere, they have joined in protest demonstrations. But in case of Burma proper, the agitating students are being charged under the peaceful assembly laws paving the way for their bails. But the student of Rakhine have been deprived of the specific benefits,” stated the attorney-general claiming that those three Rakhine students can be prosecuted under the
peaceful assembly laws only.