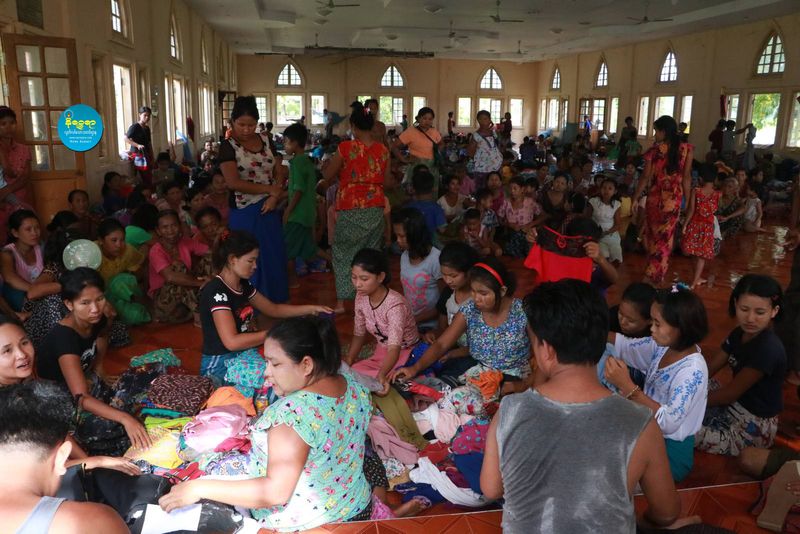 More than 900 people from six villages in Kyauktaw Township have reportedly fled their homes and taken refuge in temples at the Mahamuni Pagoda. The villages from include Alay Kyun, Kyauk Gu Su, Myauk Taung, Thay Zee, Shwe Pyi Thit and Shwe Pyi Haung.

Abbot Pyae Thiri, chairman of the Refugee Resettlement Committee, told Narinjara that they are currently being housed in three Dhama Halls in the temples south of the pagoda complex.

“ They firstly arrived at the Mahamuni Pagoda on the 5th of this month. The total number of people present is 943, 204 households, 454 males and 489 females. They fled because they were too scared to stay in their villages. We all know what happened in Shwepyi and Alay Kyun at the end of August,” Sayadaw Pyae Thiri said.

Currently, more than 900 people are facing food shortages. There are also housing and shelter difficulties. Nearby villages are helping out and providing food. The abbot said that the Ministry of Social welfare, Relief and Resettlement (MoSWRR) have provided 100 bags of rice so far.

U Tun Tha Sein, Rakhine State Hluttaw representative of Mrauk-U Township said, “It is impossible for such a large number of people to live in such temples for a long period of time. The temples, as you know, are places where pilgrims can stay temporarily. So there needs to be long term plans for their shelter. At the moment, the problems are food and shelter, ”he said.

The Kyauktaw Township Administrator, (MoSWRR) and the International Committee of the Red Cross (ICRC) had been notified that over 900 people are sheltering at the Mahamuni Pagoda, he said.

“The ICRC has the lists. They will provide support based on the township administrator lists. At present, 100 bags of rice have been delivered by MoSWRR, ”said Tun Thar Sein.

Daw Hla Aye Sein, a 62-year-old woman from Myauk Taung village who fled to the Mahamuni Pagoda, said, “It is not possible to live in the village. Heavy artillery shells were fired into the village. They fired rifles whenever they entered the village. They tormented us in various ways. They called people from the village and gathered them at the monastery. They beat us unthinkably. Some were arrested and taken away. They took what they wanted from our homes. People can no longer stand it," she said.

Myauk Taung village has more than 400 houses and most have fled, with the exception of a few who have stayed behind to guard the village.