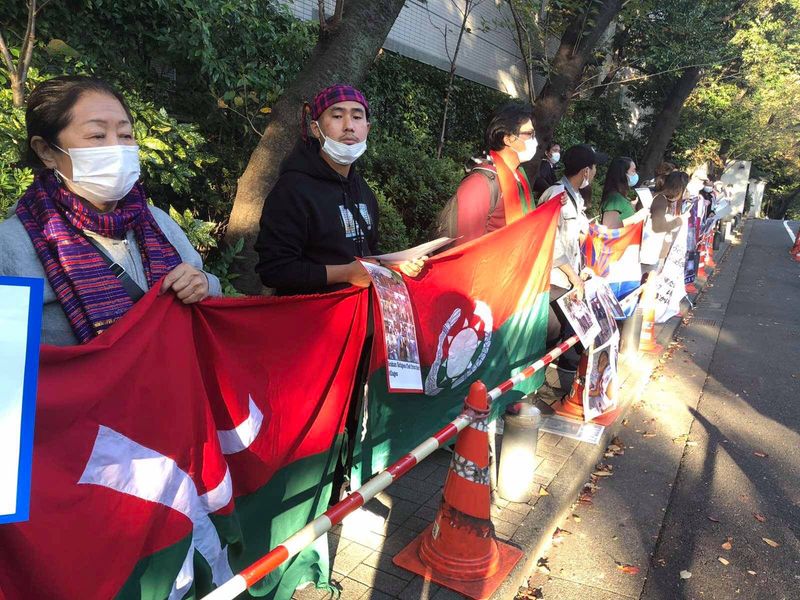 The Arakanese (Rakhine) people along with their ethnic allies in Japan staged a protest demonstration in front of Myanmar embassy at Tokyo yesterday raising five-point demands to the Burmese government in Naypyidaw.

Their demands include an immediate end to the Burmese soldier’s offensive in Rakhine, 4G internet relaunching  in the State, providing humanitarian assistances to the refugees and their protection, immediate release of students who were arrested for calling a ceasefire in Rakhine  and allowing foreign journalists to cover the Rakhine State.

Ko Bone Myint, chairman of Rakhine National Democratic Party (Japan), revealed that the protest demonstration was aiming to raise voices against the fighting in Rakhine and also helping Rakhine people for their self determination to a bright future. The demonstration was also supported by various allied ethnic groups like Kachin, Karen, Shan, etc.

"We protested against the atrocities of Burmese army personnel over the Rakhine nationals. Demands were also raised for them to get the liberty of self determination so that Rakhine people can nurture their future,” he said while talking to Narinjara News.

He also added that the five-point demands were displayed on banner & posters in both Japanese and Burmese languages. They also hold vine & flags and chanted slogans in favour of their demands.

Around 80 protesters joined in the program that started at 3 pm and continued till 4:30 pm (Japanese time).