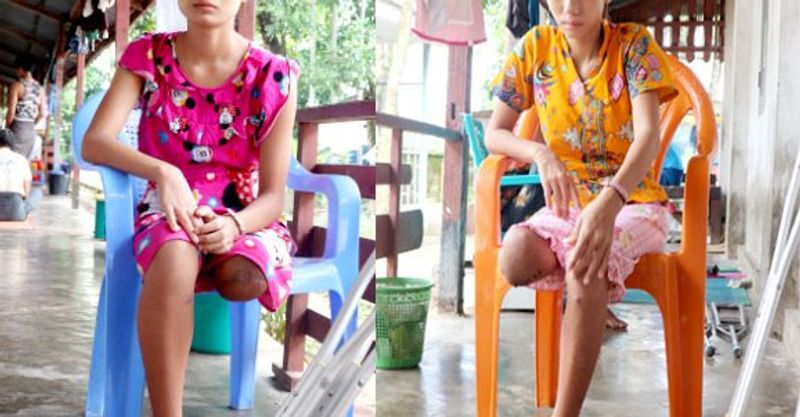 Many landmine victims demand government assistance for rebuilding their lives shattered by landmines during the conflicts in Rakhine State of Myanmar.

Manan Su, a 21-year-old woman from Sine village under  Myebon township, who had lost one of her legs to landmine blast, said, “We have not received any assistance from the government. We want the government to support us to rebuild our lives.”

Besides Manan Su, there are five persons in Alodawpyi IDP camp of Sittwe, who had lost their organs to landmine explosions.

“Presently we have no problem here at the camp, but I want to have some skills for my survival. The victims specially need professional skills to live later with the dignity. I hope the government will support us in the process of rehabilitation,” she added.

A resident of Thinbaw Kwe village under Kyauktaw township, Ma Moe Moe New, who lost one leg to landmine blasts said she also needed help from the government.

“I am now taking shelter at Alodawpyi monastery relief camp and also learning to operate the sewing machines. Once I compete the training, I will return home and rebuild my life with the family. Presently there is no help from the government, but it will be nice if we get it,” she added.

The Sittwe war disaster relief support group, set up by Sayar U Than Tun, has been assisting many disabled persons with supportd from private donors.

“There are more than 10 landmine victims who lost their legs in Rakhine State. There were 198 patients whom  we treated at  Sittwe hospital. They all sustained injuries from bullets and landmine blasts. However, the government is yet to offer any support for their rehabilitations,” he added.

The International Committee of the Red Cross (ICRC) has been offering prostheses to the victims of amputations across Rakhine State.

"Those victims have been offered supports from outside private donors. Prosthetics are also being installed with the ICRC’s help. A total of eight people have been deployed here,” informed  Than Tun.

Zaw Zaw Tun, Rakhine Ethnics Congress (REC) secretary alleged that the Rakhine landmine-victims have not received any assistance from the government except medical cares.

There is no action group on landmines in Rakhine, where as  Karen and Kachin have similar groups. Those groups involve representatives from the government, international organizations and local civil society outfits. Similar groups become the need of the hour for Rakhine too, he added.

In Rakhine, as REC counts, the explosions due to landmines and other devices have killed at least 33 people and injured 73 individuals in the last two years.