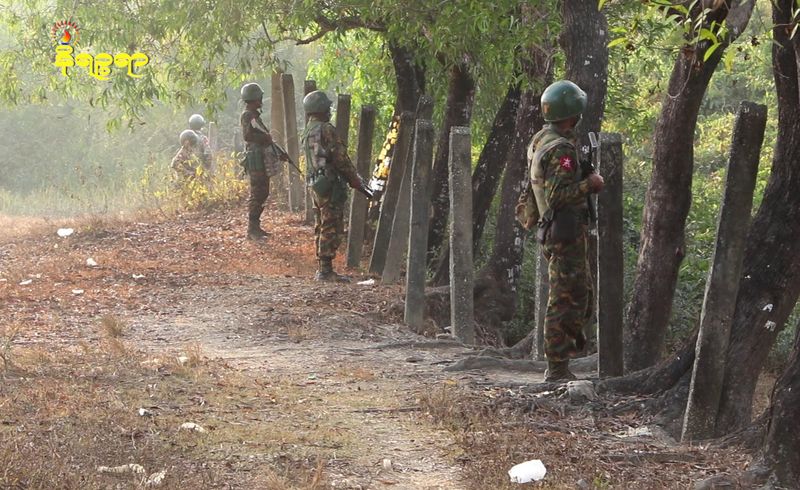 The Military Council has arrested more than 30 people in 5 days from November 10 -14 in Rakhine State.

Those arrested were 10 youths including university students from Sittwe, 7 from Buthidaung Township, 7 including a monk from Minbya Township and 9 people from 2 villages in Ponnagyun Township.

In Sittwe, 6 young people living in Gandaryone Monastery in Danyawaddy (A) Ward, and 3 other youths from nearby Athawka Rama Monastery, were arrested on the night of November 11 by Military Council troops.

A person close to Gandaryone Monastery said, “ Military Council troops and police arrested them around 11:00 PM on November 11.All these youths are students and working people who came from the rural areas”.

In addition, U Zaw Naing Win (43), a businessman from Sittwe, was also arrested by soldiers and police at his home on the night of November 12, according to local sources.

In Minbya Township, a total of 7 people, including the abbot of Aung Myay Kone Yadanawara Maythu Monastery and 2 gold shop owners, were arrested at their homes or at the monastery, on the night of November 12 by Military Council troops.

Other people (not from Minbya) who were arrested: 10 youths including university students from Sittwe, 7 from Buthidaung Township, and 9 people from 2 villages in Ponnagyun Township.

Those arrested in Minbya were Sayadaw U Wara Myitzu (50), the abbot of Aung Myay Kone Yadanawara Maythu Monastery, U Aung Tun Thein (51), owner of Taw Win Gold Shop, and U Kyaw Nu Maung (49), owner of Win Toe Gold Shop. In addition, 4 young residents who returned from a pub at night were also arrested.

Other victims of arrest were U Shwe Thee (56), U Aung Win Thein (49) and U Tun Hla Aye (49) from Kywe Htoe Village in Ponnagyun Township.

A village elder said “The Military Council troops blindfolded, tortured and brought them to

Among them, Daw Bar Ma and U Kyaw Zaw Hla are reported to have been released, but their families have not yet been contacted.

“Around 10:00, the soldiers hey dis-embarked from a ferry vessel, and entered the Tan Koh Village firing guns. A military drone was also firing, and the soldiers chased after the villagers. to arrest. Everybody fled except the old people and those who could not run due to ill health ”a villager said.

These arrests triggered an estimated 4000 people who fled from the villages of Tan Koh, Kywe Htoe, Nghet Kyee Kyun, Aidin, Padaytha were forced to seek safer places Sabahta, Kan Chaung and other nearby villages, as well as to downtown Ponnagyun.

In Buthidaung Township, 7 people including 3 Muslim businessmen were arrested too.

They were inspected by the Military Council at Buthidaung harbour when they returned by boat after selling cattle. A relative said that the Muslim businessmen were arrested and taken to the military camp after around 600-lakh kyats of money from the sale of cattle were found among their belongings.