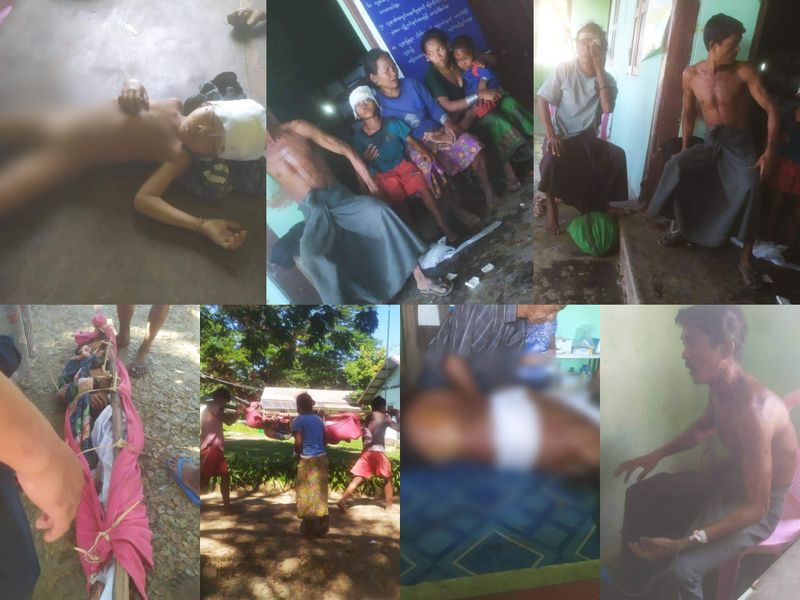 On November 16, 11 villagers including 3 children under 10 years old, were killed and 2 dozen others were injured, when the Military Council bombarded on a child ear-piercing ceremony in Jade Chaung village, where most of the Myo ethnic group lives, in the northern Maungdaw township near Myanmar’s western border.

A village elder said “The Kyein Chaung-based Border Guard Forces (BGF) opened fire with artillery. The shells directly hit the site of the ceremony. There were too many casualties. A total of 11 dead and 24 injured. The wounded were taken to hospitals in Kyein Chaung and Maungdaw”.

At that time around 12:30 PM on November 16, there was no fighting around the area where the artillery was unleashed on the village.

The Arakan Army (AA) issued a statement on November 16 condemning the Military Council’s action regarding this incident.

Khaing Thu Kha, the spokesperson of AA, said that, “ the Military Council blatantly violated the international laws that must be followed in wars, committing war crimes and crimes against humanity every day.”

Villagers said that after the injured were sent to Kyein Chaung regional hospital in northern Maungdaw, a local Military Council Operation Strategic Commander visited them and gave them 5-lakh kyats in aid.

The AA statement continued “ The Military Council, demoralised due to the high number of casualties on the battlefield in Rakhine State, has turned their guns on residential areas where innocent civilians live, attacking with artillery, drones and warplanes on a daily basis.”

In a separate incident on November 16, an artillery shell fired by the Kansaut-based  539th Infantry Battalion in Kyauktaw Township landed and exploded in Chaung Tu village, killing 3 civilians in their 50s and seriously injuring 3 others.  The full news can be read here (https://tinyurl.com/3ez24ya8)

On November 17, two residents of Doone Muslim village suffered bullet wounds and sent to Kyauktaw hospital after a small cargo boat in the Kaladan River fired on by the Military Council troops near Yoke Tha village in Kyauktaw township.