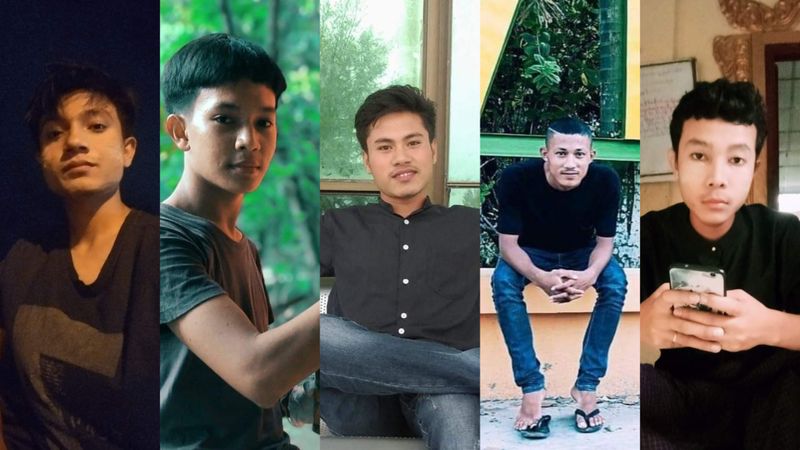 Relatives of nine detainees fear from for their safety, after Military Council intelligence agents took the detainees away from No. 1 Police Station in Sittwe township of Rakhine State, where they had initially been held.

Out of the nine detainees , six are young students living in Gandaryone Monastery in Danyawaddy (A) ward of Sittwe township, and three are locals from nearby Athawka Rama Monastery.

A family member said.” Earlier all 9 were detained at Sittwe No. 1 Police Station until the morning of November 18. When the family members went to the police station to bring food that night, the police told them that the detainees were taken away. A family member said that they are very worried because of various rumors about the arrests.”

This relative continued, “ People from Athawka Rama Monastery told me that 6 youths from another monastery were also taken away. I contacted the police and they said they didn't know anything .”

The family member continued,“ We don’t know anything particular yet. At first we heard that they were taken by military intelligence officers. Later we heard that they were sent to the regional command headquarters. But there is no clear news. We have not been allowed to meet them. But at the moment, we understand that they have been taken by the military intelligence. We don't know where they are and what is going on, so everyone is worried.”

When the people were apprehended, no specific reason was given for the arrests, and the family members did not hear anything from them until 5 days later, which raises questions about how the law operates in Myanmar, the family member continued.

"The families should be informed about why they have been arrested, and where they are being held. I wish the authorities had a kind heart. We have not been allowed to see them since the day they were arrested. Everyone is very worried. I would like to ask what is the legal justification for this kind of treatment.? ”, the family member added.

The 3 arrested at Athawka Rama Monastery are U Tun Sein Maung (48), U Maung Hla Tun (46)and U Oo Soe Win (29). They drive motor tricycles for a living.

All of them were arrested by the Military Council troops and the police at around midnight on November 11.

When the three from Athawka Rama Monastery were arrested, their phones and motor tricycles were confiscated too.