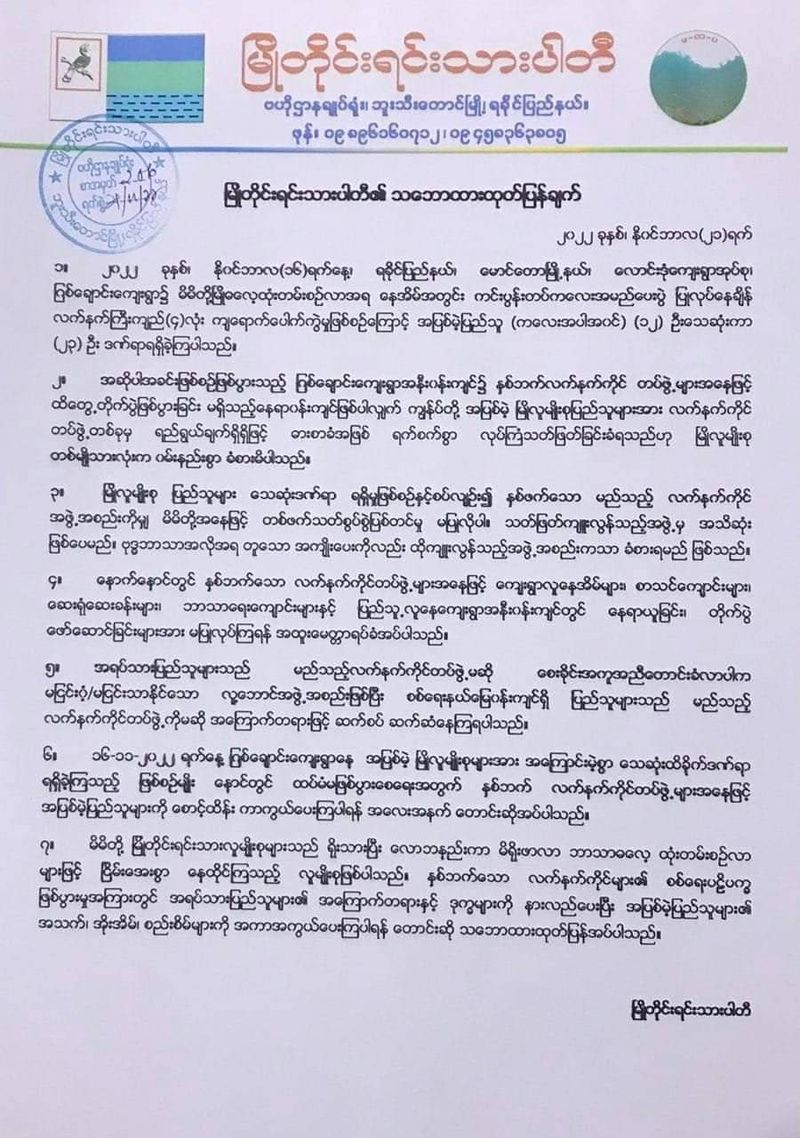 Mro National Party has responded by requesting both military parties to exercise the utmost restraint, so that innocent people are not harmed.

The statement of the Mro National Party dated November 21 requests the armed forces on both sides “ to avoid stationing or initiating attacks near residential houses, schools, hospitals, clinics, religious buildings and villages.”

An official of the Mro National Party said, “ The two armed forces we are referring to the Tatmadaw (the Military Council), and the Tat Taw (Arakan Army). The current fighting in the region is between these two factions. If both groups are working to protect the people, then such incidents should not happen again in the future. We must not allow the people to suffer. I am asking both organizations to exercise restraint, so that innocent people are not harmed. But the things that have happened can’t be fixed anymore”.

Mro people are a minority ethnic group in Rakhine State, with a population of only around 20000, mainly live in Maungdaw, Buthidaung, Ponnagyun, Kyauktaw, Mrauk-U townships.

The Mro statement added. “There was no fighting in the vicinity of Jeitchaung village, when three artillery shells exploded inside the village, killing innocent Mro people.” adding that” the entire Mro ethnic group is deeply saddened by the fact that the people were deliberately and brutally killed as hostages by an armed organization.”
“Mro National Party doesn’t want to accuse any organization of shelling into the village but the organization that committed that these things should be aware of its actions, and that these actions are against the spirit of Buddhist teachings,” according to the statement.

On November 16 afternoon, 3 artillery rounds fired by Kyein Chaung-based Border Guard Forces (BGF) 7th Battalion landed and exploded at a child’s ear-piercing ceremony being held in Jeitchaung village, killing 11 people including 3 children under the age of 10, and injuring more than 20 villagers.

The injured were sent to hospital, and a 15-year-old Grade-7 student died on November 18 while receiving treatment at Sittwe Hospital. Other injured have also been sent to some hospitals.

After the shelling that killed innocent civilians, some officers of the Kyein Chaung military tactical command center in Maungdaw met with the villagers and said that the shooting was not by their hands, but committed by AA. The villagers said that the Military Council provided rice and 5-lakh kyats for each casualty.

In addition, the Military Council-owned newspapers also alleged and reported on November 18 that the artillery shells that fell in Jeitchaung village were fired by AA. However, some eyewitnesses claim that the shelling was actually carried out by the BGF 7th Battalion based in Kyein Chaung. Furthermore, AA also issued a statement condemning the actions of the Military Council.