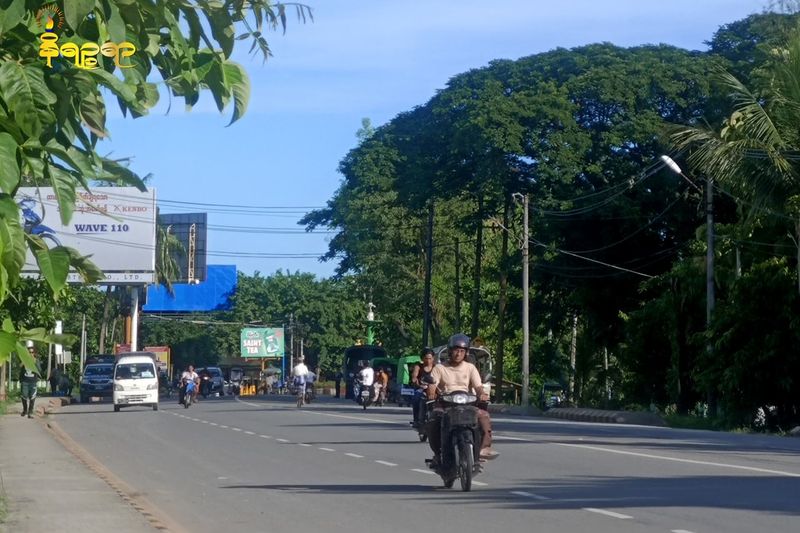 Local Muslims say traffic police in Sittwe city of Rakhine State are targeting Muslims traveling on bicycles and tricycles in the city and Bu May, The Chaung areas, for arrest or extortionate financial demands for allegedly not having driver licenses.

Such arrests and corrupt demands for money have been experienced in the previous years, but the situation has worsened this year. Local Muslims claim traffic police are waiting and arresting not only at the traffic checkpoints in the city, but also on the routes where Muslims travel.

Since before Thingyan, the arrests have escalated significantly. Because of these arrests, it has become very difficult to travel. They make arrests at traffic checkpoints, as well as on the roads without checkpoints. They arrest anyone who looks like a Muslim and thy demand money.

A young Muslim man from Bu May village said, “They claim that they are arresting anyone without a driver license, but this is not true. When two of us both Muslims, sat behind the motorcycle of a Rakhine friend, they didn’t arrest us. Muslims always face targeted arrests and extortion payments.”

If traffic police man the checkpoint, there can be some negotiation they allow the bicycles and tricycles to be taken back from the arrested places, if they get 50,000 kyats. If arrested, the police usually extort for 30,000 to 50,000 kyat, and that amount of money is too much for the poor people who make a living as motorcycle taxi drivers.

A Muslim resident who does not wish to be named, criticized the fact that only Muslims are arrested for not having a driver’s license, but others are not arrested without any identification documents. That makes the Muslims feel like they are being discriminated against because of their race, and such acts can be considered as a form of abuse of power.

“The law shall be for every human being. One-sided arrests and extortions are mean and unjust actions. We would like to question whether we no longer have the right to move freely even in Bu May village. We want the relevant senior officials in charge to take action to prevent these situations”, he said.

In addition, he questioned whether the Muslim bikers cannot even travel between the Muslim villages of Bu May and The Chaung, because they are being arrested near the Sittwe University near Bu May.

Unable to bear such arrests and extortion anymore, they sent necessary papers and documents through the relevant village administrator and applied for driver licenses, but they have not been issued yet, the villagers said.

Rakhine State Road Transport Administration Department announced that it would allow unlicensed motorcycles to apply for a license until the end of November, after conducting arrests of unlicensed vehicles in Sittwe last November.

In Sittwe, the traffic police sometimes check and arrest non-Muslims who do not have license or don’t wear safety helmets, but Muslims are being extorted every day, locals said.

However, a young Rakhine biker from Min Gan neighborhood disagreed saying, “As far as I understand, it is not only Muslims who are arrested for not having driver licenses or not wearing a safety helmet. They are arresting everyone. There are arrests in Sittwe too, and Rakhine people are also arrested and with demands money. They extort money from everybody who does not have a driver’s license. Perhaps the amounts of money could be different. There are many Muslims in Bu May, and they seem to think that only them are being arrested and extorted. In fac, Rakhine people are also facing extortion”, he commented.

The young man also suggested that Muslims should carefully apply for driver licenses and the relevant government officials should verify and issue the licenses regardless of race.

Similar to Bu May, people who don’t have a license and don’t wear a safety helmet are arrested and extorted money by the traffic police almost every day in Sittwe, locals said.