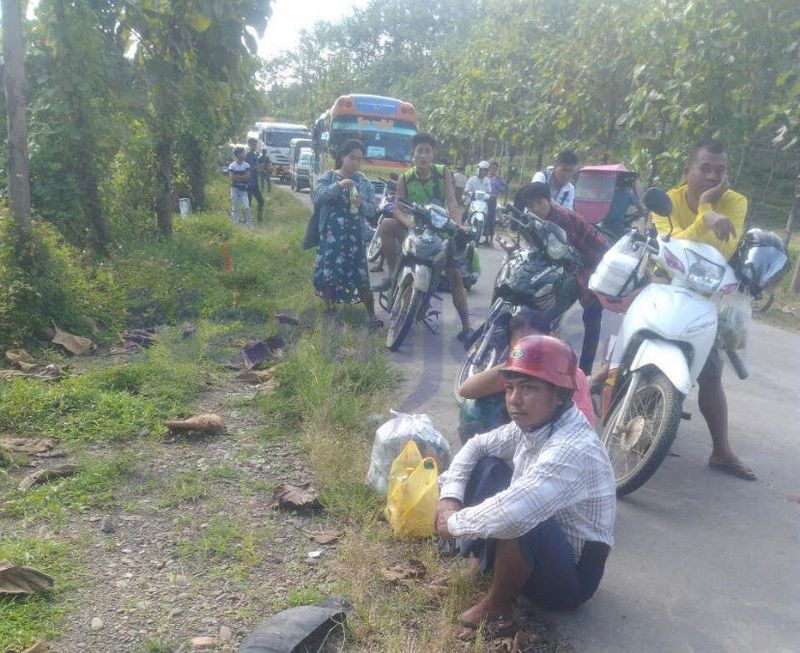 Although transport operations since the informal ceasefire deal on November 28 with the Arakan Army (AA) should have resumed, three days later the Military Council is still blocking most roads and waterways widely used by the Rakhine people. However the main routes that are important for the Military Council themselves are exempted.

So far transport operations have only been allowed to resume on the Sittwe-Rathedaung- Buthidaung waterway in Mayu river, and the A Ngu Maw-Maungdaw waterway, but other waterways and land routes are still blocked locals said.

A resident of Sittwe criticized the reopening of the Sittwe-Rathedaung-Buthidaung waterway in Mayu River as “only for the benefit of the Military Council.”

This local pointed out that “When the transport routes between Buthidaung, Sittwe and Maungdaw were closed, the people suffered, but the Military Council itself suffered even more. They also could not travel on those routes. When the transportation was cut off, it was difficult for them to access their food supplies. Reopening this waterway now as a priority, means that it was done for their own interests, not out of concern for the local people”.

As of the morning of November 28, Sittwe’s entry and exit gate remains closed. A driver from Sittwe said that traffic was still blocked after November 28 because the gate is located on the road that connects with other cities including Yangon.

“When we heard the news that the ceasefire deal had been reached, we were very eager to drive again, hoping that the blocked roads would be reopened. But in the morning, we went to the military police outpost to inquire, and they said that the road was not reopened yet. they didn’t know when it would reopen”, he said. Most waterways in northern Rakhine state, including Sittwe-Ponnagyun-Kyauktaw, Rathedaung- Ponnagyun Sittwe, Minbya-Myebon waterways, are still blocked with strict checks at all checkpoints, with traffic is restricted as before.

“If the roads were closed due to military tension, they should have been reopened during the ceasefire period. When the roads were closed, all health, social, and economic aspects of the people were affected. The commodity prices had also risen too much. It is quite inconvenient when it is needed to travel around very long distances instead of using a shorter route. And it will be more difficult for those who need to go to hospitals and clinics” , he said.

In the past, the Military Council justified the military situation in the region to block waterways and roads in the region. But now, the ceasefire agreement has been reached, so the routes should be reopened, a Kyauktaw resident also suggested.

Starting August 13, the Military Council has banned road traffic city by city in Rakhine state. Then, from October 18, waterways in northern Rakhine state were still blockaded and the operations of private vessels were also systematically obstructed.