‘We don’t see that just by holding this election, all the political problems happening in Myanmar can be solved’ 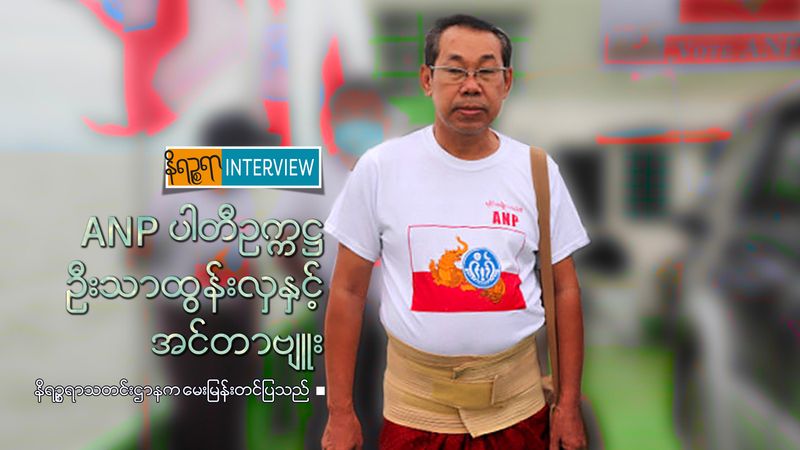 The Military Council plans to stage an election in August this year. In Rakhine State, criticisms about the election are spreading. The Arakan National Party, won the most parliamentary seats in the 2015 and 2020 elections in Rakhine State. Narinjara News asked to party chairman U Thar Tun Hla to present the Arakan National Party’s (ANP) position on the 2023 election.

Narinjara: The Military Council is preparing to hold elections this year. I would like to know whether or not the ANP party will participate in this election?

U Thar Tun Hla: Currently, there is no discussion and decision in our party regarding the election.

Narinjara-A top leader of the ANP party, U Ba Shein, has been widely criticized for telling a media outlet that ANP will participate in the election as a political party according to the Party Registration Act.  What do you think about what U Ba Shein said?

Narinjara: what is your view on the upcoming election of the Military Council?

Narinjara: There is a lot of criticism inside Myanmar, as well as the international community about the upcoming election. How do you assess the Rakhine people’s attitude towards this election?

Thar Tun Hla: At present the fighting in Rakhine State has only a temporary cease- fire. In Rakhine, during the battle between the ULA/AA and the Myanmar military, none of the people who were arrested on suspicion have been released. Rakhine people have little interest in the current election, when prosecutions continue and some people who have fled the war, still cannot return to their villages and live normal lives. I see the interest of voters in the election is declining.

Narinjara: How much do you think the 2023 election of the Military Council will affect the political and military situation in the country?

U Thar Tun Hla: The political problem is that currently in Myanmar ethnic peoples have been deprived of their rights to create their own destiny, and their rights to self-governance, and on the other hand, their human rights and democratic rights as citizens being taken away day by day. I would like to say that I do not see that the political problems happening in Myanmar, can be solved by just holding this election, because we lack the democratic standards for holding elections.

Narinjara: So how do you think this country’s problem can be solved?

U Thar Tun Hla: The solution to the political problem that Myanmar is currently facing is broad and deep. It cannot be done in just one sitting. However if the main stakeholders have the intention of solving it, it is necessary to reach a political agreement.  It is important to be able to establish and implement processes based on any agreement reached. I would like to say that the political problems in Myanmar can only be solved by reaching and implementing a political consensus.

Narinjara - Thank you for answering these questions.

U Thar Tun Hla - Thank you.