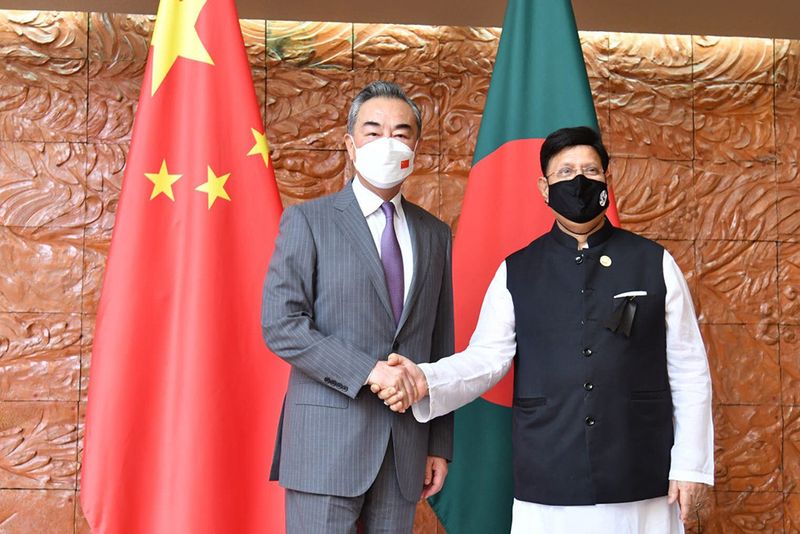 Bangladesh and China on Sunday signed four MoUs and agreements to boost cooperation between the two countries.

The cooperation documents were signed after an hourlong bilateral meeting between Chinese State Councillors and Foreign Minister Wang Yi and his Bangladesh counterpart AK Abdul Momen at a city hotel.

State Minister for Foreign Affairs Md Shahriar Alam briefed journalists after the bilateral meeting and said details of the signed documents will be shared with the media later.

He said the Chinese foreign minister is pleased to see Bangladesh’s socioeconomic progress under the leadership of Prime Minister Sheikh Hasina.

Both sides discussed bilateral, regional and global issues in the meeting with a hope to “elevate” the relationship between the two countries to a “new level”.

“We must stop it (worsening situation in Rohingya camp),” Shahriar said while responding to a question on the Rohingya issue.

China has said the country is sincerely working to find a solution to the Rohingya crisis terming Myanmar a difficult country to handle.

“Myanmar is a difficult country. We are sincerely working to resolve the crisis and will continue our efforts in the future. He (Minister Wang) stated it very clearly. It’s a difficult country and difficult to handle,” Agriculture Minister Muhammad Abdur Razzaque told reporters quoting the Chinese Foreign Minister as saying.

Razzaque, who received the Chinese Foreign Minister upon his arrival at Hazrat Shahjalal International Airport on Saturday, conveyed to Minister Wang that Bangladesh is unable to bear such a big burden as the country has limited resources.

The agriculture minister said there is an impact on social security and social stability of the country due to the presence of over 1.1 million Rohingyas in Bangladesh.

“It’s a big threat to our national security,” he told the Chinese foreign minister after welcoming him to Bangladesh.

He left for Mongolia wrapping up his less-than 24-hour visit to Bangladesh.

Foreign Minister Wang Yi during his meeting with Momen said all Bangladeshi students will return to China from now and visas will be issued accordingly, said Chinese Deputy Chief of Mission Hualong Yan.