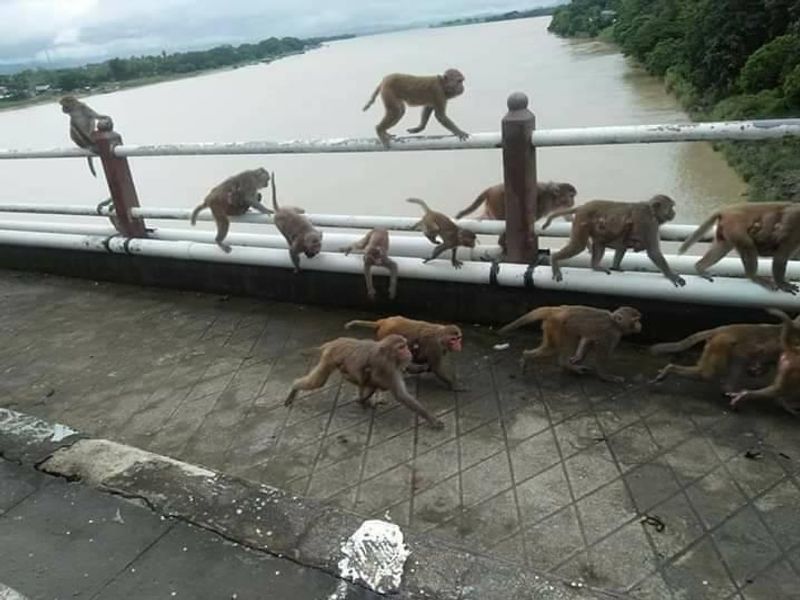 Over 400 monkeys, taking shelter at a historic pagoda in Kyauk Taw, which is 80 miles away from the Arakanese capital city of Sittwe, have been facing food shortages as the number of visitors to the holy place is reduced drastically because of ongoing fights between Myanmar Army soldiers and Arakan Army rebels in the area.

“Every year the historic pagoda attracts a large number of people for pilgrimages. However, this year we have recorded hardly one fifth of total annual visitors primarily because of security concerns,” informed U Aung Tun Sein, president of the concerned pagoda trustee adding that the fighting between the armed forces and rebels has resulted in lower number of pilgrims that finally caused severe shortage of food items  for the monkeys.

As the monkeys are starving for days, they are now roaming around the locality and lately a large group arrived at Gassapanadi bridge near Kyauk Taw Township in search of food items from the travellers. Feeling sad for the monkeys, many have offered bananas, mangoes, peanuts etc, but it was not enough for the inmates.

“Lately some well-wishers have brought cooked food items for the monkeys in the pagoda premises. Many others also brought raw food items to feed the monkeys. Thus we have tried to solve the problem for the time being,” revealed the president.

The fighting between Myanmar Army soldiers and Arakan Army rebels has affected other wild animals as well in various parts of Arakan.

In March 2019, a bear came out from the jungle hideout to a nearer village even attacked local villagers. A 23 years old resident of  Hthi Swe village under Rathidaung township was killed in the attack, where as another villager sustained severe injuries.