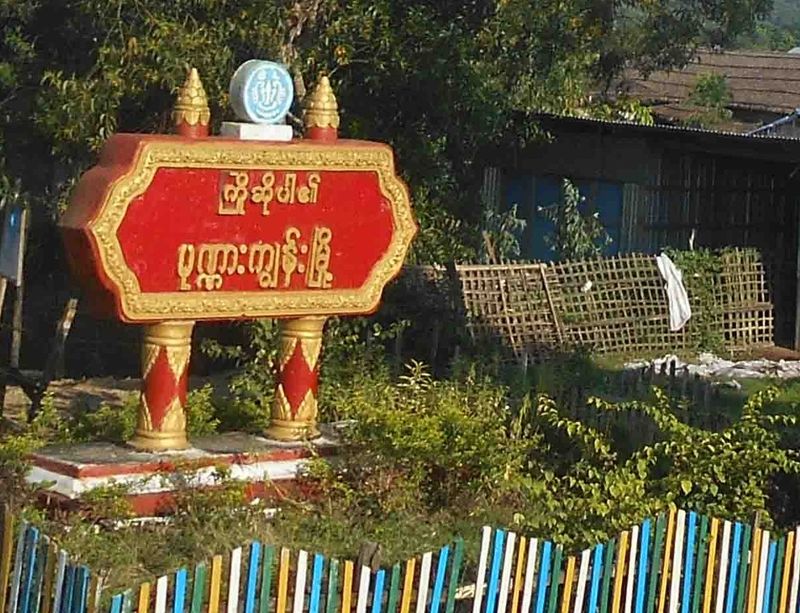 It has been reported that one 27 year-old woman was killed and one novice monk injured following an artillery strike on Wednesday by the Myanmar navy during an ordination ceremony for novice monks in Let Ma Seik village, Thay Tat Village Tract, Ponna Kyunt Township Rakhine.

The deceased woman is understood to be 27 year old Ma Aye Mya Saw, the younger sister to Daw U Hma Win whose three sons were being ordained at the ceremony.

“Ma Aye Hmya Saw was killed, and she did not have a family. Her mother has already passed away while her father U Kyaw Nyein is still alive.  Her elder sister’s sons were having the ceremony to become novice monks, and yesterday they were donating the robes to the monks.  It was at this time that this terrible thing happened” a relative of Ma Aye Mya Saw said.

The injured novice monk has been named as Maung Oo Kyaw Win (21).   He was injured in the right foot, it has been reported.

U Thar Zan Aung, a relative to the village administrator said, “On March 18, after 11pm, the navy boat was sailing downstream along the Kaladan and began firing artillery shells.   The ordination ceremony ended and they hid behind the school brick wall.  At around 12.30am a shell exploded close to where they were, killing one and injuring another” he explained.

“The shells fired from the navy boat killed her. During a pause in the ceremony, they tried to run and hide behind the school brick wall.  That was where they were hit. Aye Mya Saw died and was buried that night.  There were so many shells fired, we couldn’t count how many.  We had to do the funeral first as it was the ordination.  They were just lobbing the shells into the village. Four cows were killed, nine were injured. One house was destroyed by fire.  We feel utterly distraught that this sort of thing has happened, especially during the ordination ceremony.  Aye Mya Saw was my sister-in-law” U Thar Zan Aung said.

“When the navy began shelling, everyone just tried to find somewhere safe to get cover. Ma Aye Mya Saw went to the path by the school to hide, and that was when she was hit.  The shrapnel hit her underneath the left arm, and she died on the spot. There was no fighting in the village, they just shelled it. About 16 fragments of the shells they fired have been collected” one villager said.

U Aung Than Tin, MP for Ponna kyunt Township said, “The navy fired the shells, they were shooting blindly.  The villagers have told me. There was no fighting or battles there.  They just shot into the village.  Parliament can’t do anything. We have urged the state government to do something, but that’s pretty much all we can do. Rakhine State government doesn’t do a thing. The State government will submit Parliament’s request to the central government.  And now, we can’t do anything because the central government seems to be completely unaware of the matter” he said.

The National assembly MP U Kin Maung Let said, “I know that the dead girl’s sister had returned from Thailand to attend the novice monk ceremony.  There were no clashes in the area.  The navy fired from the river, and the shells rained down on the village.  They often shoot from the bank of the river, don’t they? They have a responsibility to protect the people from armed insurgents, and existing laws set this out.  But they don’t have the right to blindly lob shells into a village”, he said.