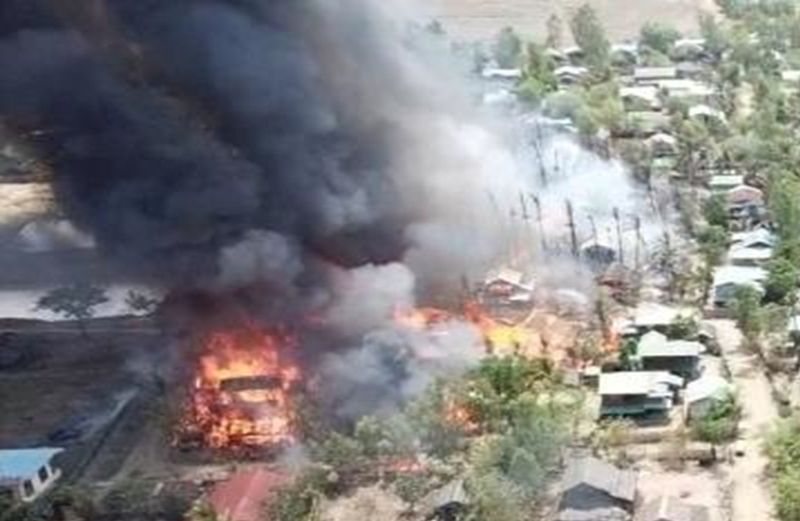 193 houses and the village middle school have been destroyed by fire in Letkar, Mrauk Oo Township. According to one villager the fire started after they heard the sound of explosions at around 1.45pm on May 16.

“The village middle school and 193 houses have been burned to the ground.  There are a total of 278 households in the village so that means only around 80 remain”, said one person originally from Letkar but currently living in Pi Pin Yin IDP camp.

Daw Bi Yeh’s house was destroyed in the fire, and she talked about her loss. “Needless to say, there is no need to say how we are feeling right now.  I’m absolutely devasted.  There’s nothing more we can do.  All the paddy seeds we were going to plant this year were stored in the house and have been destroyed. What can we say to the government? There is nothing that can be said”, she said.

Daw Sein Nyunt Thar, also from Letkar and staying in Pi Pin Yin camp said “the fire destroyed our house, our tractor. There is no where to return to anymore, just a pile of ash in the village, that’s it.  If I could back to the village, I would go back. I feel like my entire live has now been destroyed by this fire.  I have nothing more to say.  They will pay for what they have done to us”.

One villager who visited the village to record the destruction and wanted to remain anonymous spoke about what they had seen. “Almost the entire village has been destroyed.  A total of 194 houses have been destroyed by the fire. The only buildings left are houses on the edge of the village and sheds” the person said.

Mrauk Oo Township State Hluttaw MP U Htun Thar Sein confirmed that many houses in Letkar had been destroyed by fire.

“193 houses were destroyed in this village.  There are almost 300 households.  We are thinking about how we can help and support those families that have lost their homes in the fire.  We have to do something,” U Htun Thar Sein said.

On May 16 at around 1.30pm a group of Tatmadaw troops left Tein Nyo village and travelled to  Letkar.  After they entered Letkar, three or four explosions were heard after which the fire started.  At around 4pm the troops left the village, according to one villager who also wanted to remain anonymous.

The Office of the Defence Services released a statement on May 17, saying that the AA had attacked Tatmadaw troops with small arms and heavy weapons in Letkar.  Tatmadaw troops returned fire, and the AA set fire to houses while retreating.  20 houses were destroyed in the fire, the statement read.

Since the government has classified the AA as a terrorist group, legal action will be taken against media groups that contact the AA.  Therefore, the spokesperson for the group was not contacted for interview.

In an RFA (Burmese) interview with the AA’s spokesperson, Khaing Thu Kha, he said that the military is trying to cover up war crimes by claiming the AA are the perpetrators. He added that the media would know more about the reality of what has happened by speaking and interviewing local people.

Last year on April 10, 27 people from Letkar were arrested by the Tatmadaw.  The following day the entire population abandoned the village. Up until the fire on May 16, the village has remained deserted.