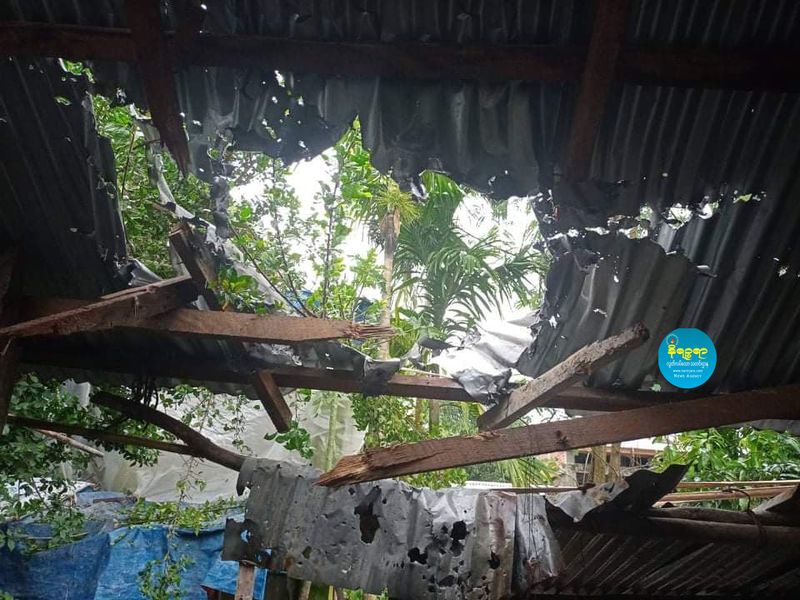 Homes in Rathedaung town have been hit by shells fired into the area at around 5pm Yesterday evening.

A home belonging to U Sit Thar Maung in Chaung Wa quarter was hit, with a shell hitting the zinc roof of his house and exploding.  In Gu Tar Pyin quarter, residents have reported that a second home was hit but the shell did not detonate. It is understood there were no casualties in both incidents.

U Hla Myint, a Rathedaung town elder who personally went to U Sit Thar Maung’s house to survey the damage explained what he had seen. “I went to see it myself. The shell fell on the edge of the roof of the billiard’s room of U Sit That Maung’s house.  The roof has a massive hole in it, it’s been shattered.  All the things in the kitchen are broken and smashed up,” he said.

Another shell fell onto a house on the outskirts of the town in Gu Tar Pyin quarter, but failed to detonate.

Today at around 5pm, Tatmadaw troops were hit in an explosion by two mines planted close to Pyar Chaung Gyi bridge as they were returning from a patrol to Battalion no. 538 close to Taung Hla Maw. The Tatmadaw are believed to have responded by firing off shells into the area, three of which landed in Rathedaung town.

Narinjara contacted Rathedaung Pyithu Hluttaw representative Daw Kin Saw Way who said that “Rathedaung residents called me to say there had been shooting. They said there had been shelling, although I understand that casualties and damage to property has been limited. They said the shelling has stopped now. We need to ask was there really a battle between the two sides? Or were they just firing off shells randomly? We just can’t say,” she said.

She explained that previously the conflict area took place far away from the town, however the current conflict area has expanded and is affecting the outskirts of the urban area, a concerning development, she said.

While over ten thousand people have fled their villages in fear to seek safety in Rathedaung town, fighting continues to occur on the outskirts of the town, which is a great cause for concern. The expansion of the fighting area is a worrying development and she urged for dignified peace talks to resume.

On June 25 one disabled IDP was injured after a shell exploded. The man was residing in the grounds of Shwe Parami monastery on the outskirts of the Rathedaung town.

Tens of thousands of IDPs are now staying in Rathedaung, many of whom are experiencing difficulties in accessing food, water and other basic necessities.