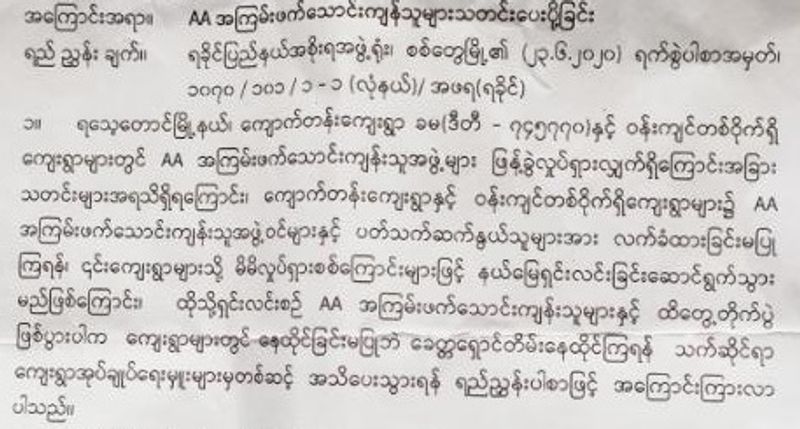 People living in the Kyauktan area of Rathedaung Township have been ordered to temporarily evacuate their homes while the Tatmadaw conducts clearance operations in the area, according to an official from the Ministry of Security and Border Affairs of Rakhine, dated on June 24.

The directive stated that there were reports that the AA was active in villages in Kyauktan and surrounding areas and therefore the Tatmadaw would conduct clearance operations in order to prevent the AA and related persons from operating there. The directive instructed residents in the surrounding area to temporarily evacuate their villages while the combat clearance operations take place in order to prevent civilian casualties.  The order was to be notified to the population via the respective village-level administrators.

“We are afraid there will be casualties so they have to move. I just heard about it.  The order was issued yesterday. They have issued instructions.  This is just in the Kyauktan area, they included a map of the area too. If they say the people in my area have to move, then I have to tell them to move. Otherwise we are afraid there will be casualties. That’s the nature of war, no one can deny it,” U Aung Myint Thein said.

Pein Taw village administrator U Saw Hla explained to Narinjara that after the directive was issued, local residents were already leaving from the 42 villages in the Kyauktan area to seek safety in other areas.

“They messaged us by text. Its official. I understand that they are calculating that these clearance operations will be decisive. The villagers are leaving.  I have yet to receive the letter with the order, but I am on my way to get it.  I don’t know if our village is included in the list.  If its the entire Kyauktan area then my village will be included,” he said.

Rathedaung township state Hluttaw representative Daw Kin Saw Way Given said that the entire Kyauktan area will have to be cleared and with over forty villages in the area, people’s basic necessities will need to be taken care of.

“The Rathedaung township administrator confirmed it.  I understand the security minister issued the order. I haven’t fully read the letter yet, so I don’t know the complete details yet.  They are saying its in Kyauktan, and Kyauktan is a wide area, there are over forty villages in the area. The villagers will have to flee if there is fighting.  Given that the government has officially announced that they must leave, who is going to take responsibility for sheltering them, for providing food and water?  The government has to take responsibility,” she said.

A number of people from villages in the Kyauktan area are understood to be currently evacuating to Sittwe and Rathedaung towns.