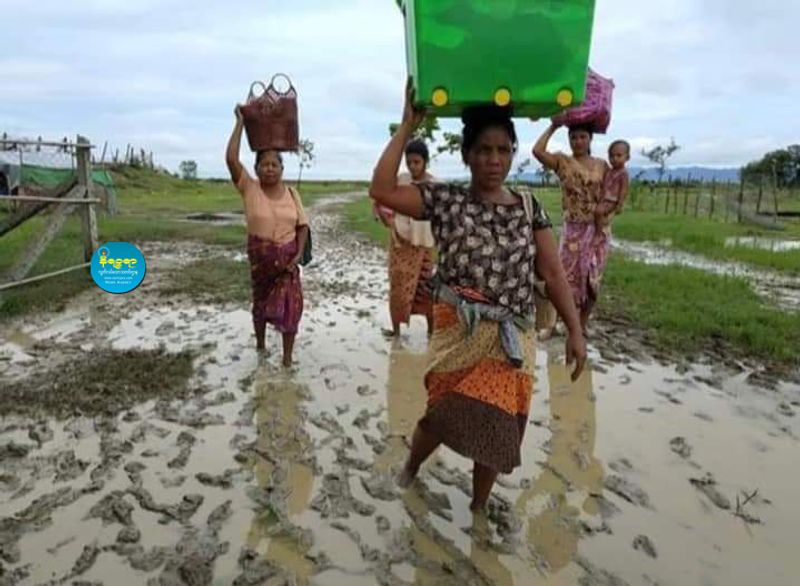 The United Nations and Diplomatic Missions in Myanmar representing Australia, Canada, the United States of America, and the United Kingdom expressed concern over the ongoing conflicts in Rakhine (Arakan) State.

In a statement, issued  on 28 June, the UN called for urgent measures to spare civilians in the conflict-wracked Rakhine State of  western Myanmar.  Expressing concern over the humanitarian crisis because of conflicts in Rakhine and southern parts of Chin State, the UN also called on all parties to respect the international humanitarian laws.

Reports of intensified fighting between the government forces (Tatmadaw) and Arakan Army rebels in and around Kyauk Tan village-tract under  Rathedaung township of Rakhine poured on. The locality has more than 10,000 people where most of them fled from their places due to the conflicts. Few families are still trapped in their residences and waiting for opportunities to leave their places.

Many houses and properties have been damaged in the conflict. According to the Rakhine State government and its humanitarian partners over 77,200 men, women and children rendered homeless after the conflict started on 21 June. Rathedaung witnessed the displacement of around 14,500 civilians to other places.

The UN statement urged everyone to fulfill their responsibilities and adopt urgent measures sparing civilians and their infrastructure. It also asked for adhering to the fundamental principles of distinction, proportionality & precaution and to facilitate the provision of relief to the people fleeing from violence, those trapped in their villages and everyone affected by the conflict.

Mentioning about Covid-19 pandemic in Myanmar, the UN urged all parties to heed the call by the UN secretary-general for a global ceasefire in order to enable efforts to contain the novel corona virus infection.

Diplomatic missions in the country also issued a statement expressing concerns over Tatmadaw’s  clearance operations along Kyauk Tan village-tract that worsened the humanitarian and security situation in Rakhine and southern parts of Chin State.

“We are aware of the historic impacts of such operations disproportionately affecting civilians. Access for humanitarian organisations must be allowed to provide appropriate response, particularly as communities respond to Covid-19 and the monsoon season,” said the statement.

It also asserted that protection of civilians, their property & livelihoods must be respected by all parties. Exodus of villagers will further contribute to Rakhine’s deteriorated situation. Mentioning about the incidents of burning properties, shelling and harassing villagers, the mission called on all armed actors to exercise restraint while in areas inhabited by local communities, some of whom may not, by no fault of their own, be able to seek refuge elsewhere.

Dialogues between armed actors are urgently needed, the mission commented adding that the Myanmar military has the obligation under international laws and to implement the provisional measures endorsed by the International Court of Justice (ICJ).

Facing the heat, the Rakhine government has called off its clearance (or military) operation in Kyauk Tan area in northern Rathedaung locality against AA rebels, who are demanding more autonomy for ethnic Rakhine Buddhist nationals.  The security and border affairs minister of Rakhine government  Colonel Myo Than had announced it.