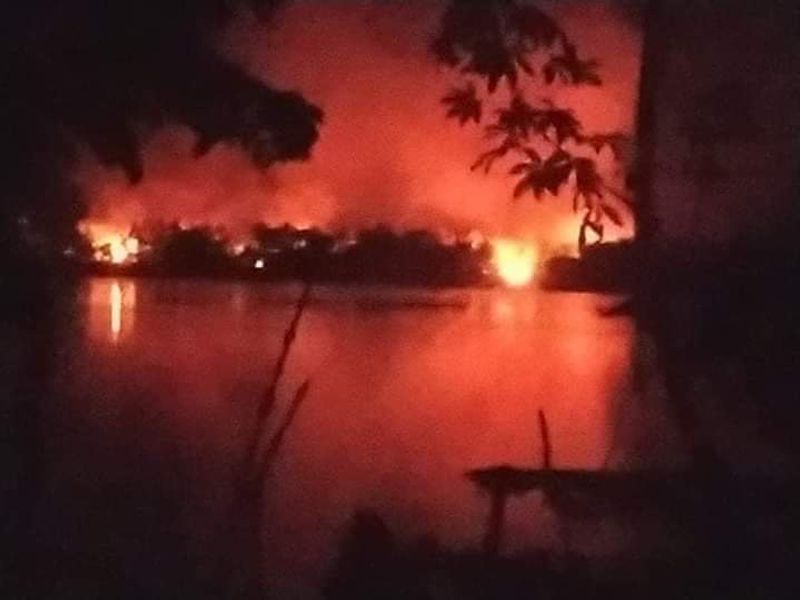 Nearly 200 homes in two villages in Kyauktaw Township have been destroyed in fires, and two people were reportedly killed. The two villages lie along the Sittwe-Yangon highway, about 3 miles south of Kyauktaw town, Rakhine State.

San Aung Kyaw, a villager from Hpayar Paung village, said that the fires were started by Tatmadaw troops at around 7 pm on September 3. He left the village and took refuge in a boat on the east bank of the Kaladan River.

"I heard an explosion and gunfire," he said. “Then, at around 6 pm, the army entered the village. The village was started the fire at around 7 pm. We are very scared. There was shooting and burning. I do not really know what happened. The fire was extinguished at around 12 o'clock at night. I fled the village and hid in the monastery”, he said.
The bodies of the two victims were taken to Kyauktaw Township People's Hospital by hearse on September 4 at 8 am.

Zaw Win, who was involved in carrying the body from Kyauktaw, said, “The body was taken from Hpayar Paung village at 8 am. The body was badly disfigured. They say the village has been completely destroyed by fire. There are more than 200 houses. Only the pillars were left. In Taungpauk village, many houses were burnt down. We have found the two bodies, but how many more are missing? No one can say where they are. None of the villagers are left in the village, ”he said.

“There were villagers in the village who witnessed it. Some were hiding when the houses were set on fire. That’s what they said. They said the soldiers burned it. The relevant authorities can investigate, who committed this crime,” Zaw Win said.

Major General Zaw Min Tun of the Tatmadaw's Truth News information unit told a news conference in Naypyidaw on the morning of September 3 that the Tatmadaw had not set fire to villages in Kyauktaw Township yesterday.

"At around 6:30 last night, the AA attacked police officers stationed at the Ah Pauk Wa police station in Kyauktaw, Sittwe with a landmine on the road, about 4,000 meters south of Kyauktaw. A policeman was wounded.

“After sending in reinforcements, attacks continued in the same place. Two corpses of the enemy were recovered along with one gun, ”said General Zaw Min Tun.

He said they are conducting counter-terrorism operations in Rakhine State and deny the allegations made against the Tatmadaw. He said what the AA says and what the AA actually does are two completely different things.

Zaw Zaw Tun, secretary of the Rakhine Ethnic Congress (REC), said: “The military's burning of people's homes is a violation of human rights. It goes beyond annihilating the rebel armed group and instead incites hatred and resentment against the people. It has become evidence that they are doing this against one ethnic group of people,”he said.
He added that the REC was compiling a list of those injuries and the number of houses burned.

Kyauktaw Township Pyithu Hluttaw member U Tun Win said, “I don't know if it was set on fire or not. Two people were killed. They are both in Kyauktaw Hospital. We can only assume that their deaths can be attributed to the shootings, ”he said.

The fires have resulted in the destruction of homes and rice mills, and have left over one thousand people homeless.