Two buffaloes killed and some houses damaged in Rathedaung fighting 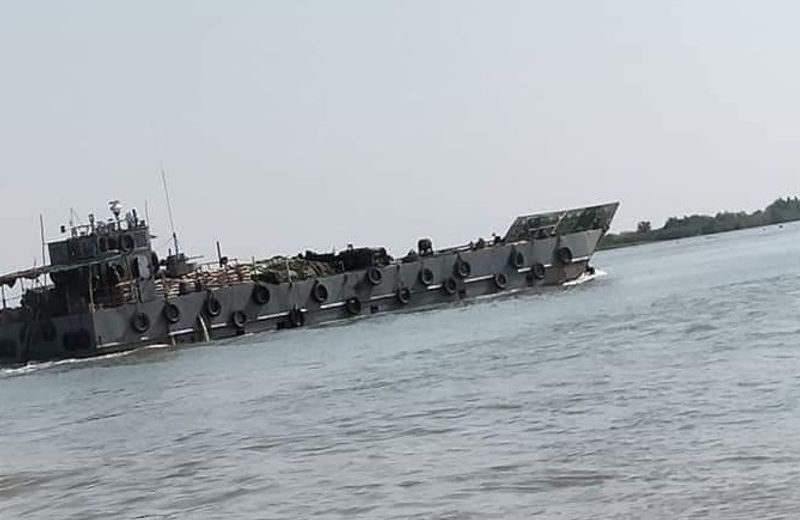 Two buffaloes were killed and some houses were damaged on Tuesday in the exchange of fire between navy vessels and the AA on the Mayu River near Musi Kyunt (Island), Rathedaung Township . Two boys also received minor injuries in the fighting.

A resident of Musi Island said, “It happened with navy vessels coming down from Rathedaung. I heard gunshots coming from the mouth of Kutaung creek. I couldn’t see how many boats came down, so I can't say for fear that I will be wrong. They say the AA fired and they shot at each other. I heard that in U Ga village, a large artillery shell exploded and the bricks were blown away. In Kanbyin village, two buffaloes died. There were many houses which were hit by shrapnel. I have heard of two boys were being injured, “he said.

The shooting started at about 5:30 am yesterday and lasted for more than 30 minutes with two navy vessels and a speedboat, according to the Shwelaung Tin village administrator.

"I don’t even remember when," he said. " As soon as I heard gunshots, I went to the bomb shelter. It was about 5.30am. The shooting lasted for more than 30 minutes. I do not know what kind of sounds they were. It was very scary. There was no damage done to the village. As the navy vessels came downstream on the Mayu River, gunshots could be heard from Myingkan Creek, Kat Chaung and up to Pan Zin Maw, ”he said.

Local residents of Mying Kan Chaung were reportedly not injured although the village administrator said a bullet had hit a house.

“No one was injured in our village. One house was hit. In Kanbyin village, two buffaloes were killed. A shell exploded in U Ga village. It was night time, so a thorough investigation is not yet possible.  They are saying that it was an exchange of fire with AA. We, the civilians, cannot say for sure because we cannot see for ourselves, ”he said.

Local residents reported that two speed vessels sent food supplies to troops stationed in Aung Zeya (Kala Chaung) yesterday morning and exchanged fire with AA troops at the mouth of the Kutaung creek on their way back.

The Tatmadaw’s true News information unit could not be reached for comment on what the local residents said.

It is not possible to confirm whether there was a clash between the navy and the AA, as the current government has deemed communication with the Arakan Army (AA) illegal.

Khin Maung Latt, a member of the township's National Assembly, was contacted but could not be reached for comment. He said he had only received information about the shooting in Akar Daung village, located at northern part Rathedaung Township at noon.