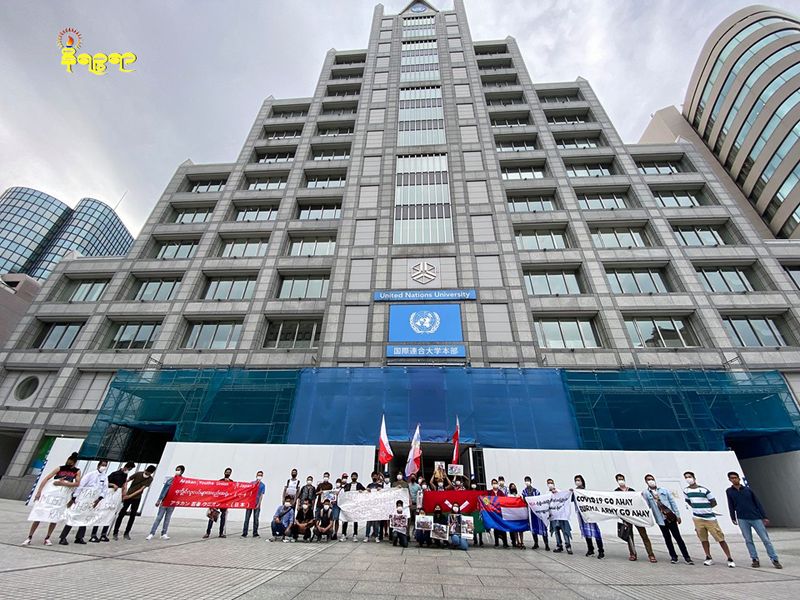 Rakhine youth have held a demonstration over the current situation in Rakhine state in front of the United Nations office in Tokyo, Japan.

The protest, which took place between 3pm and 4pm on July 1st, was organised by the Rakhine Youth League (Japan) which is made up of overseas Rakhine people based in Japan.

The Chairman of the league U Kyaw Than Hlaing spoke to Narinjara about the protest. “The demonstration took place in front of the UN office in Japan.  This wasn’t a silent protest; we used slogans which were shouted out.  First we sung the Arakan national anthem while saluting the Kingdom of Arakan flag. After that I explained in Japanese the reasons why we were protesting,” he said.

The protestors demanded an end to the arrest, torture and killing of civilians held under suspicion by security forces, for hostilities in Rakhine to cease and to allow the United Nations to assist those affected by the conflict.

Following U Kyaw Than Hlaing’s explanation about the protest’s demands, the Karen National League (Japan) deputy chairman and members from the Rakhine Youth League spoke separately.  After singing “We will rule our land” the protest was brought to a close, according to U Kyaw Than Hlaing.

He explained that the Rakhine Youth League had written directly to the UN General Secretary detailing the troubling events unfolding in Rakhine state.

On June 25 people representing Rakhine, Karen, Kachin, Palaung, Mon, Chin and Shen ethnic groups gathered in front of the Myanmar embassy in Tokyo to stage a protest demanding peace and for the conflict to end as well as for internet services to be restored.