Tokyo: Ethnic groups of Myanmar march in solidarity demanding an end the war and lasting peace 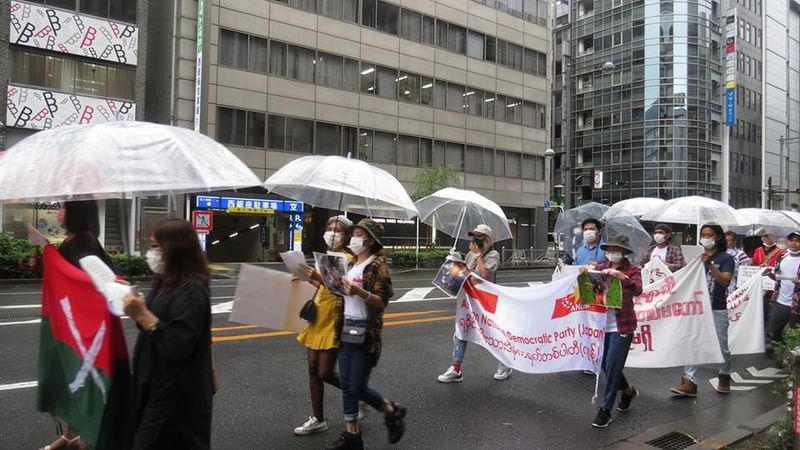 Three Myanmar ethnic alliances have marched together on Thursday demanding an end to the fighting in Myanmar and lasting peace.

The march was organized and lead by the three ethnic alliances - the Arakan National Democratic Party (Japan) / ANDP-Japan; Kachin National Organization (KNO-Japan) and the Karen Alliance in Japan (OKOJ). More than 100 people of Chin, Mon, and Shan ethnicity participated.

The protesters demanded an end to hostilities and lasting peace, reopening of the internet in Paletwa Township, Rakhine and Chin States; and that the alleged rape by three Tatmadaw troops in U Ga village Rathedaung Township should undergo a transparent investigation to determine the truth.

ANDP-japan chairman Ko Phone Myint spoke about the march. “The Myanmar Army has sent troops to ethnic areas in Rakhine, Paletwa in Chin state, Kachin Shan Karen and Palaung areas. As a result of the militarisation and offensives launched in these various ethnic areas, many people are losing their lives on a daily basis. Children and students are losing out on educational opportunities. Our Japan-based group is deeply saddened by the growing number of internally displaced persons and the human rights abuses being reported. That is why we are calling for the attacks to stop and to hold political talks for peace, ”he said.

Kachin leader Ko Dwe Ja called for the killers who assaulted and murdered two Kachin teachers to be brought to justice and for the truth to be revealed.

Karen leader Soe Lin Sein called for action to be taken against the Myanmar army for the killing, murder and human rights abuses against the Karen.

ANDP-Japan General Secretary Thet Tun Aung condemned the rape of the woman in U Ga village, Rathedaung and said the government must take responsibility to uncover the truth.

The protestors gathered to speak in Hibyia, Tokyo and then marched to the Ginza Park. More than 100 people chanted slogans at the foreign embassy.

The demonstration was held on July 23 from 1pm to 3:30 pm with the marchers holding banners bearing slogans.

The protesters demanded an end to military offensives; the immediate reopening of the internet in townships in Rakhine and Paletwa townships; protection of IDPs with humanitarian assistance; to repeal and rewrite the 2008 constitution; solutions for the peace process towards genuine peace; to withdraw charges against editors and reporters; for the reopening of certain websites and for local journalists to be able to freely report.