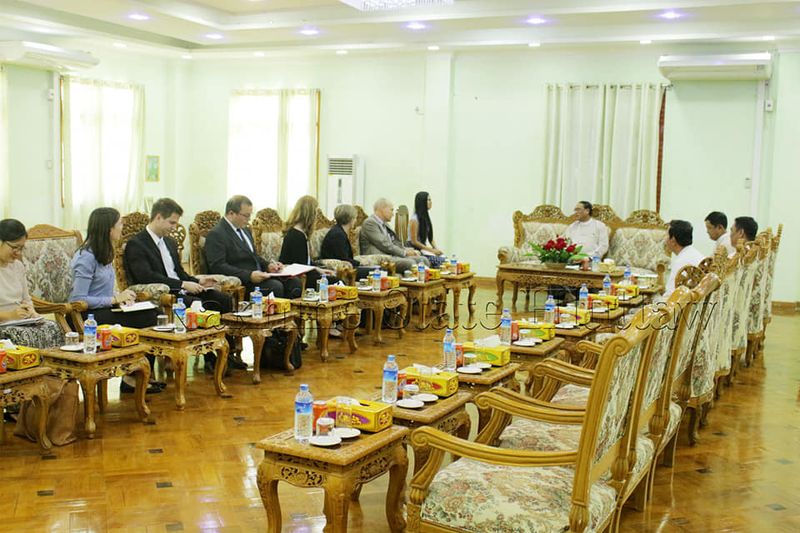 The US Embassy will urge the Rakhine State Government to be effective in aid provision to Rakhine IDPs, the Yangon based US Embassy’s Deputy Chief of Mission Mr George Neil Sibley has confirmed while meeting with Rakhine State Parliamentarians.

According to Deputy Speaker U Myat Than, who spoke with Narinjara, Mr George Neil Sibley said this while being received by the Rakhine Parliament Speaker U San Kyaw Hla on February 20th.

“He said he would ask if aid from INGOs was effectively reaching the IDP camps.  He would ask what difficulties the government had in delivering the aid.  He was going to meet with Rakhine State Government Secretary U Thein Zaw Win and promised he would push forward these points in the  meeting. He confirmed he would raise the Parliament’s suggestion” U Myat Than said.

Rakhine State Speaker U San Kyaw Hla and Deputy Speaker U Myat Than, and Myebon and Sittwe State Parliamentarians U Aung Win and U Aye Thein also attended the meeting.

“As Rakhine State Speaker we have explained that INGOs including ICRC and WFP are unable to provide aid to the camps due to restrictions imposed by the government.  They have to obtain government permission.  When we meet the main point of discussion will be the issue of the ICRC and WFP providing aid to the IDPs as soon as possible”, he said.

Fighting between the Arakan Army (AA) and Myanmar Tatmadaw has been taking place in Rakhine State for nearly two years. Over 106,000 people have been displaced, according to a Rakhine Ethnic Congress (REC) January 26th statement.

The lack of aid provided by the government, as well as preventing the distribution of INGO and donor aid has attracted strong criticism.