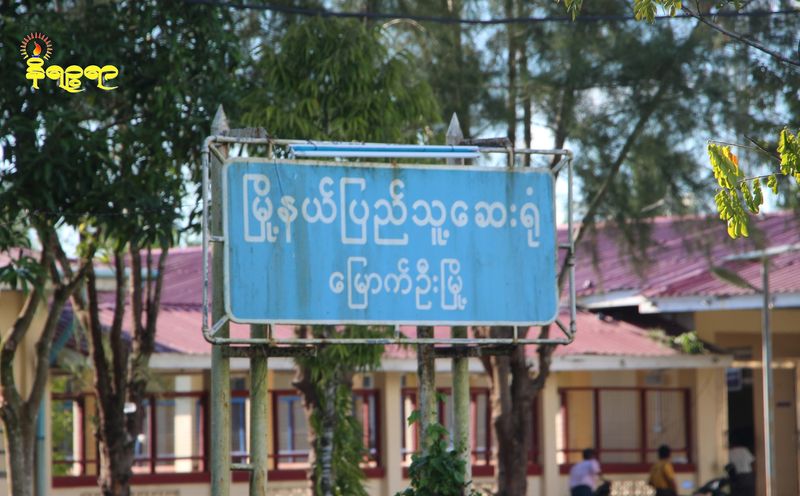 Staff and patients have been forced to evacuate Tein Nyo Station Hospital following shooting along the main road this morning, according to reports.

Evacuees include one woman who had been shot in the neck, 12 health staff including Doctor U Myo Min Tun and existing patients.  They have been transferred to Mrauk Oo District Hospital this morning.

According to Doctor U Kin Maung Than from Mrauk Oo Hospital, at around 6am this morning a Tatmadaw convoy was involved in a mine explosion while driving towards Kyauktaw from Mrauk Oo.

Troops began shooting at which point Tein Nyo Station Hospital was hit by gunfire.  Patients and hospital staff were then transferred to Mrauk Oo Hospital.

“They couldn’t stay there any longer as Tein Nyo Hospital was being shot up.  Patients were ordered to be transferred to Mrauk Oo.  The first group have arrived, the next lot are still on the way.   I don’t know how many patients there are.  12 health staff are also being evacuated” he said.

One woman was hit when Tein Nyo Hospital was shot up. Daw Than Aye Kyi (55) – who had come to help and look after patients - was hit by a bullet which entered the right side of her neck, the village administrator for Tein Nyo U Wey Hla Aung told Narinjara.

“12 people had been injured in Tein Nyo and Daw Than Aye Kyi (55) and some other people had come to the hospital to help look after the wounded.  The bullet hit her on the right side of the neck. She has been sent to Mrauk Oo Hospital”, he said.

Earlier this morning a total of 16 people were injured after a Tatmadaw convoy opened fire using both small arms and heavy weapons.  The 16 injured included 12 civilians from Tein Nyo IDP Camp, one from Taung Oo and 3 from Tha Yet Ta Pin Thein Tan village, Kyauktaw.

Separately, 8 people were injured, 4 seriously, following the shelling of Paung Toke (Muslim) village, according to U Chaung Chu who is in charge of the village.