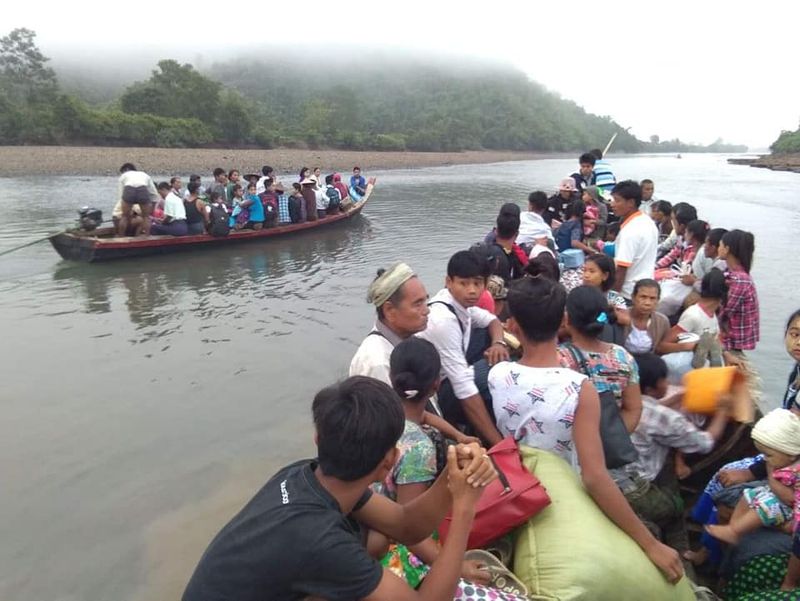 Over a thousand villagers from Wra Thaya and Yaw Sanon under Meabon township in Arakan fled their residences after a young pregnant woman was killed and later five villagers were arrested by the Myanmar Army (Tatmadaw) personnel.

A villager from Wra Thaya village, who has taken shelter in Meabon camp, informed that initially a column of Tatmadaw arrived in the village and asked everyone to get inside residences.

“Meanwhile, a young pregnant woman was killed by the soldiers when she along with her husband came to sell fishes. Later five villagers went missing after they were picked up by the security personnel,” said the villager.

After the incident, thousands of villagers from Wra Thaya and Yaw Sanon left their residences and assembled at the downtown Meabon IDP camp.

Notably, the pregnant woman (U Than Khin, 32) was shot dead by army personnel on 10 November, when she returned back to her village (Wet Ruu) from Wra Thaya in a small machine boat.

Her husband claimed that they did not hear any sound when the army personnel asked them to stop and hence went on with their machine boat on Yaw Chaung creek. Later they faced bullets from the security personnel, where his wife (U Than Khin) got a bullet injury and subsequently she died on the location.

Daughter of U Tin Myint informed that many villagers had left their residences for safer places because of Tamadaw advances. They are still waiting for U Tin Myint for almost a week. Even the family is thinking to leave their village for taking shelter in other localities.

U Aung Win, a representative of Rakhine State Parliament from Meabon Township admitted that many local villagers have arrived at Meabon camp.  The villagers alleged that the army personnel had seized mobile telephones from the young villagers.  Some villagers are also being arrested by the army.

A young man from Yaw Sanon , who is taking shelter in Meabon camp, revealed that one-third of the original villagers have left their localities fearing further army actions.

U Kyaw Mying from Wra Thaya village tract informed that only 500 people were left behind in the village presently. More people had already left the village out of fear because of army hostility.