As soldiers approach a Rathedaung village, over 2,000 people flee 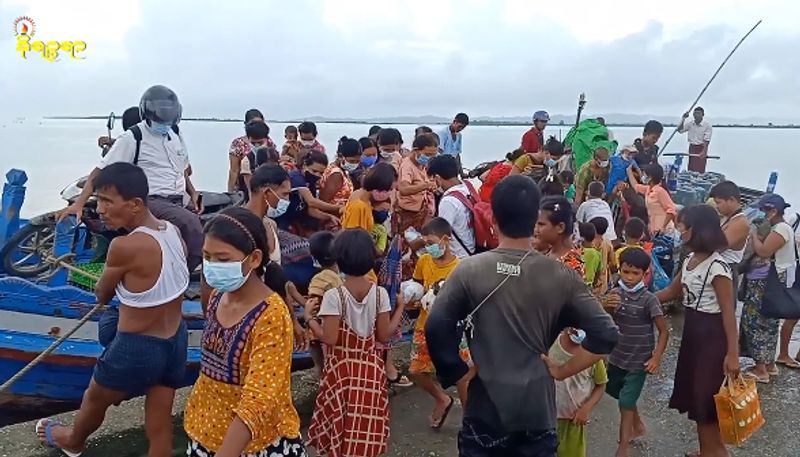 Two Navy vessels after sailing along the Ngalapya creek on  Mayu river harboured at Ngalapya port of  Mosi island at around 2:30 pm on Wednesday. The port is around two miles north of Kutaung village.

Kutaung village administrator  U Thein Aung  informed that the villagers got scared by the presence of military personnel at Ngalabya jetty. Many villagers ran with some of their belongings and a few even used vehicles to leave for Sittwe in the afternoon.

“I do not know about their destination and how long the military people may stay there. But the villagers panicked and left their residences. There are elderly people and also minors in the group. Villagers are not normally comfortable with the soldiers,” said Thein Aung.

Khin Maung, a local villager revealed that they could hear the sound of gun-shots from the shore. He counted those to be around 10 points.

Villages got terrified by the gunfire but no one is injured, he added.

Rakhine State is presently witnessing the outbreak of Covid-19 and the Union health and sports ministry has asked everyone to stay at home.

"But we are more scared of military atrocities than the corona virus infections. So we could not follow the ministry’s directive to stay inside residential campus,” admitted the villager while talking to Narinjara News.

Kutaung village supports over 1,000 households  with a population of around 5,000.  Almost half of them fled the village to nearby villages of Ray Pike Son, Zee and Sittwe, the capital of Rakhine state, informed  U Khin Maung Latt, a member of the National Assembly.

Earlier, on 17 September  an artillery shell was fired by the security forces towards Shwe Laung Tin village of Mosi island killing a rice mill owner and injuring two others. The incident spread terror among the villagers and over a thousand people left Shwe Laung Tin, Myingkan Chaung and Kanbyin villages for a safer place.

Khin Maung Latt expressed agony that the Burmese government and also the international community had  failed to intervene into  the matter that nearly 3,00,000 civilians had to leave the conflict zones of Rakhine State and live in deplorable conditions till date.