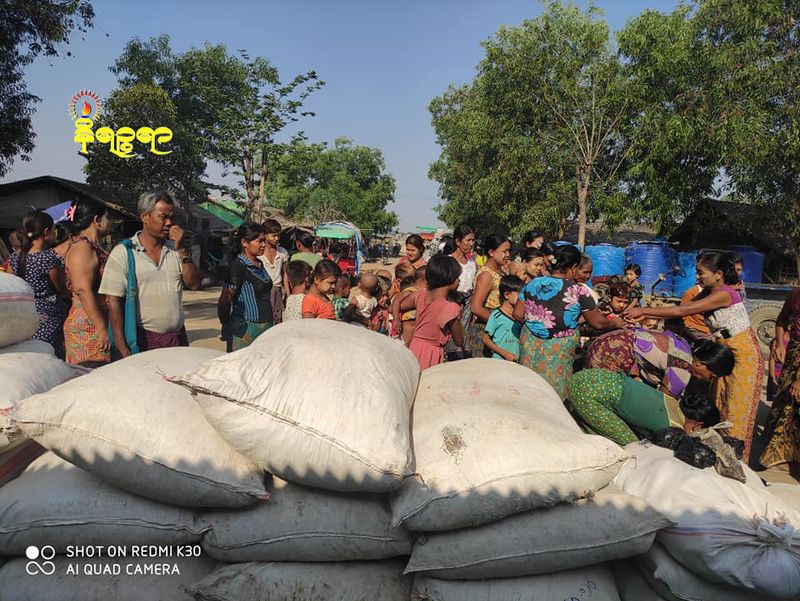 A column of Myanmar army (Tatmadaw) on 10 November seized around  500 bags of relief-rice from Tin Nyo IDP refugee camp under Mrauk-U township, said the camp in-charge, U Wai Hla Aung.

The rice bags were offered by the Union relief and resettlement ministry and the International Committee of the Red Cross (ICRC) for the benefit of IDPs for the month of November.

Those were stored at Tin Nyo monastery near the camp and later were taken away by three  trucks without any notice to the abbot and camp leaders.

Now the camp officials claim that there is no sufficient rice bag to support the inmates.

“Many bags of rice were provided by the Rakhine State disaster management department for the help of refugees. There were around 100 bags donated by the ICRC. Over 500 bags of rice were kept at the village monastery. The soldiers took those in the morning,” stated the camp in-charge.

U Soe Naing, a member of the refugee camp committee informed that the soldiers came and directed us to distribute the rice in front of them.

Later they loaded the rice bags in trucks and took those away. He believes that the security forces were suspecting many rice bags might have gone to Arakan Army members.

The camp management committee informed about it to the Mrauk-U township and district administrators but yet to receive any response.

A spokesman to Rakhine municipal ministry U Win Myint admitted that he came to know about the incident. But he denied any knowledge about the rice bags donated by the disaster management department.

General  Zaw Min Tun, chairman of Tatmadaw True News team was not immediately available for comments over the matter.