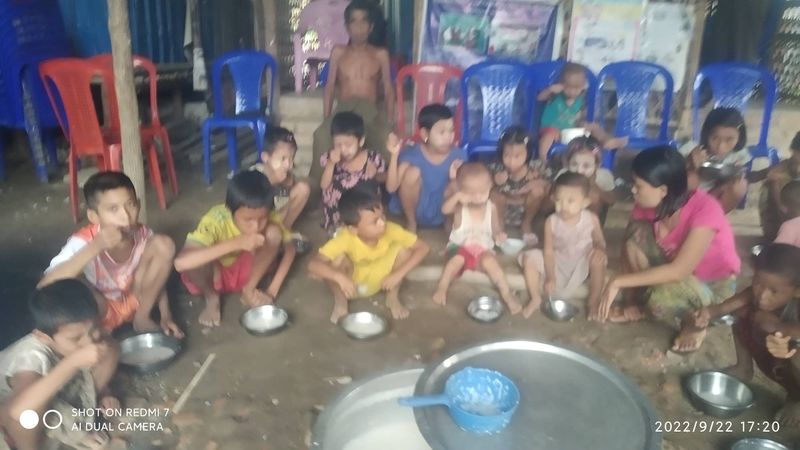 Narinjara News, 23 September 2022
The refugees in a camp of Mrauk U are facing starvation due to the shortage of rice supply after the military council prohibited the transportation of INGO, NGOs  to those camps.
About 1,000 people are taking shelter at Myo Oo Kaung IDP camp and they have no sufficient food items. So the children are being offered the boiled rice only, said the camp-in-charge.
"We are getting donations only from the ICRC. Lately the ICRC and other NGOs are being restricted to reach us by the junta authority. We are out of food items since yesterday and giving boiled rice to the children,” he added.
Since the the Arakan Army has been fighting against military council in various parts of Mrauk U township, the people are facing troubles.
Mrauk U Youth Association has been notified about the crisis of food shortage for refugees.
State social relief and resettlement ministry supported the refugees till may this year, but later it stopped the initiative.
“If the food supply system is not restored it may create social problems in the coming days. So we are worried about the future,” asserted the camp-in-charge.
Since 16 September, the junta authority has prevented the INGO and NGOs in delivering humanitarian supports in six townships of Rakhine State.
Moreover, the military council had closed most of the highway and waterways connecting Mrauk U and it has resulted in more troubles to common residents and also the asylum seekers in the camps.