Campaigning against one year internet ban, two more youth from Kyaukphyu face Peaceful assembly charges while one women from Ann is under investigation 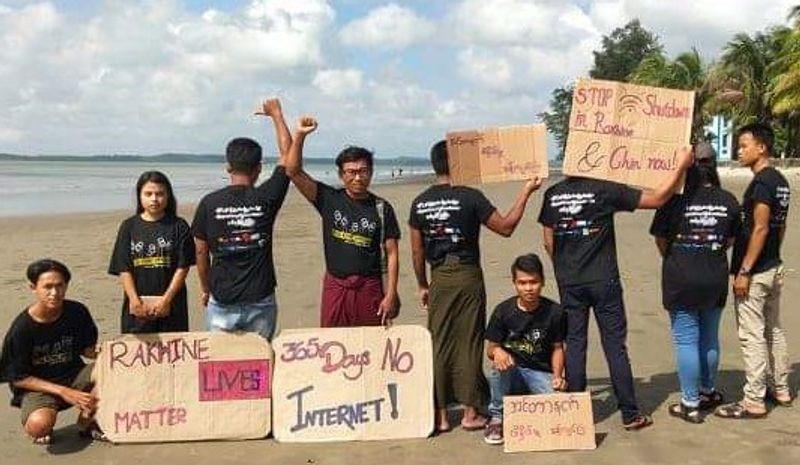 Two more youth involved in a campaign demanding the resumption of the internet in Rakhine one year into the blackout now face charges for violating section 19 of the Peaceful Assembly law, while one woman from Ann township also involved in the campaign is currently being questioned by police.

Ko Min Za Aung, advisor for New Generation Youth Group spoke to Narinjara. “They told us that headquarters had told them to hold us.  I don’t know which headquarters though.  Four or five of us had stood at the entrance to the town with banners explaining that it was one year since the ban on internet was imposed. We had taken photographs which we then posted on Facebook, and that’s how the case was opened,” he said.

On June 21 members of the Youth Group had gathered at the entrance to Kyaukphyu to observe the one year anniversary of the internet blackout in Rakhine and Paletwa township in Chin state, and demand that the internet ban be lifted.

“We weren’t noisy when we did it. In today’s world people use the internet for work, to do business.  The internet is incredibly useful for education, healthcare and religion and the ban means that people’s lives have been plunged into an information blackhole.  We have been shut off from the rest of the world, and we want to be connected, that’s why we did this,” Ko Min Za Aung said.

Ma Aye Aye Naing the chairwoman of Ann township’s New Generation Youth Group told Narinjara that she was also being investigated by police for campaigning against the internet blackout which had been photographed and posted on Facebook.

Similarly, members of Ramree youth group had gathered at the Ramree town entrance to campaign against the internet ban on June 21, photographed the event and posted on Facebook.  The youth groups communication officer Ko Myo Min Tun now faces charges for violating section 19 of the Peaceful Assembly law.

June 21 marks one year since internet services were suspended in seven townships in Rakhine and Paletwa in Chin state. Numerous civil society organisations and social activists from a number of towns and cities across the country, including Sittwe and Yangon, have staged events calling for internet services to be resumed. Many have posted pictures of their protest banners on social media networks.