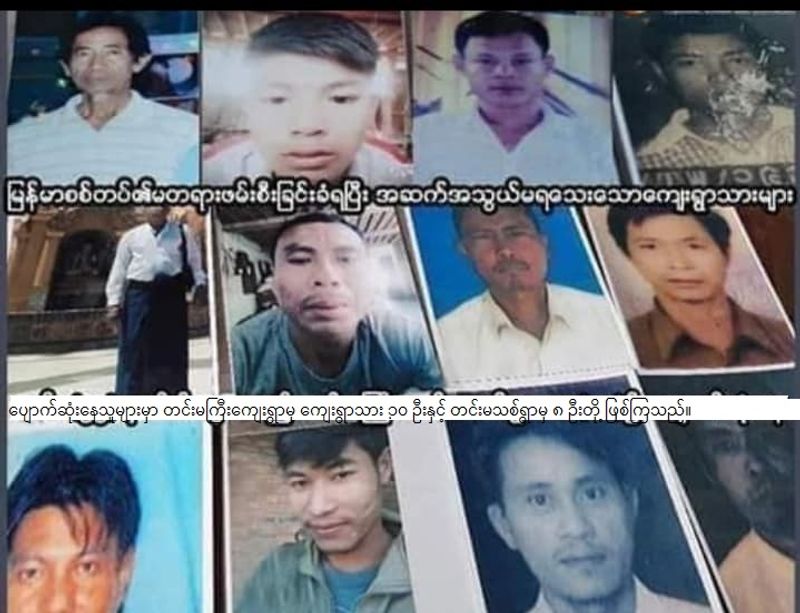 Officer of Kyauktaw Myoma police station, who was approached by  a group of people at around 3:30 pm on 8 December to file a case of 21 missing villagers, but the police officer denied it and even threatened them of arresting, alleges the family members.

The group of around  20 people was led by  Tinma village administrator and he later informed that  the police officers on duty did not accept the complaint.

A 63-year-old woman, who went to complain about her missing husband after the arrest by security personnel, said that they went to the police station to file a case about her husband who went missing in March 2020.

“I came to know that the village administrator had to leave the police station as an officer threatened him to arrest. I arrived there later and handed over my complaint to an officer,” she added.

Her husband was arrested in front of her while he was having foods at home in Tinma village under Kyauktaw township. The Burmese army personnel took him to their camp atop Taung Shay hills located nearby to their village.

Besides her husband, over 20 villagers from Tinma and Tin Ma Thit villages were picked up by the soldiers  and since then they remain untraced, claimed the families.

Eight villagers were arrested from Tin Ma Thit on 13 March and 10 from Tinma village on 16 March. They were taken away by a column of Tatmadaw. Three people who were as guards at the village monastery are also missing since then.

Altogether  21 persons had gone  missing so far. So the concerned families wanted to lodge a complaint, said Zaw Win (b) Lutu Zaw Win, a social activist who accompanied them to the police station.

He pointed out that the Tatmadaw officials announced in a press conference that the family of missing persons can file complaints under to the law.

“But here the police officer refused to accept the complaints. I pursued with him that a police case is necessary, but he only indulged in debates with me,” asserted Lutu Zaw Win.

Later however the police officer accepted the documents and informed that he would submit those to the military authority.

Kyauktaw township police chief Kyaw Thu Tun could not be reached for comments as his phone went on ringing.

Earlier on 27 November, General Zaw Min Tun, chairman of Tatmadaw True News, stated during a media  conference in Naypyidaw that the families with missing persons could file complaints and take legal actions.

On 13 March, eight persons from Tin Ma Thit village namely U Kyaw Win, U Hla Kyaw Gyi, U Maung Than Soe, U Saw Shwe Than, U San Thar Maung, U Maung Mya Aye and U Maung Tun Sein were arrested by the soldiers, claimed the victim families expressing their worries about the detainees.