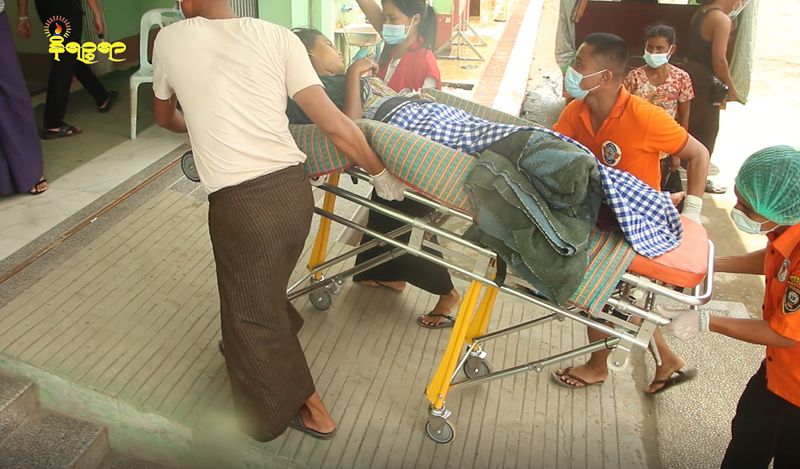 A young woman was seriously injured in a landmine explosion that took place at around 7:30 am on Saturday near to Buddaw village under Ponnagyun  township of Rakhine State.

The lady sufferer has been identified as Ma U Soe (18), who was hit by the explosion as she went to work in the mountains with some of her relatives, said  her  mother Daw Nay Soe.

Her right leg was already amputated below from the knee.  Both of her hands were also seriously injured.

Her father’s name is  U Maung Saw Phyu and they are residents of Buddaw village.

“Ma U Soe  went to collect bamboo shoots. She was walking little late and accidentally stepped on a landmine.  It seems the mine was planted few days back. I have no idea about the people involved in planting the mine there,” said  Daw Nay Soe.

Buddaw village often witnesses  clashes between the government forces (Tatmadaw) and Arakan Army members. Presently the security forces are camping  a mile west of the village.

“Many soldiers are in the camp over the mountain, where the villagers regularly go for collecting forest produces.  The villagers have to face troubles in the area but they cannot avoid their works,” she added.

U Tun Maung, a Pyithu Hluttaw member from Ponnagyun  township informed that the girl was taken to the hospital by a vehicle. Now she would be shifted to Sittwe general hospital, said the Parliamentarian while talking to Narinjara News.