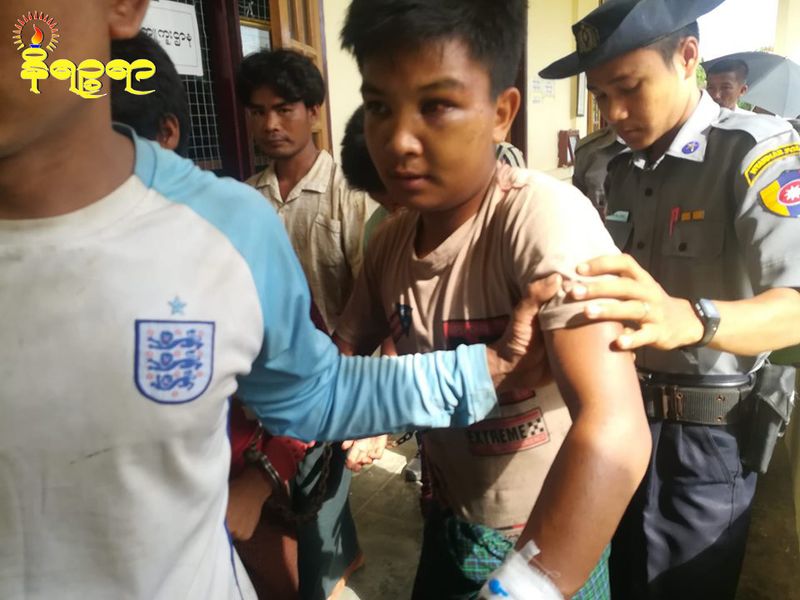 The numbers of suspects allegedly arrested over linked with Arakan Army have reportedly reached over a hundred in Rakhine State since 2018. The recent cases involved in charged with under section 50, section 3 of explosion (manhandle) law and section 17 (1) (2) of unlawful association.

“ As much as I remember, under section 17 (1) (2) has least punishment. This section was used for the cases before March this year. May be there were three to four cases. But, the rest cases after March are charged with the counter-terrorisms law and explosion law”, Daw Aye Nu Sein, the Advocate from Sittwe said.

“ Yes, this is totally true that the Counter-terrorisms law and explosion law become the most common usage laws at the moment”, U Kyaw Nyunt Maung, the Advocate from Sittwe also said.

But, Daw Aye Nu Sein believed that there could be two reason for this changes.

She added that ,“ Since Unlawful Association Act under section law 17 (1) (2) has little punishment, terrorisms become very obvious charges. Because, international can be involved in this case and it reached into the most common charges. Thus, I think, they enjoy threatening and suppression”.

She said that Unlawful Association Act under section 17 (1) (2) has just one to five imprisonment while Counter terrorisms law and explosion law have upmost life sentence in prison.

“ Section 17 (1) has one to three year imprisonment. Section (17) (2) has at least three to five year. But, both the counter-terrorisms law and explosion law have ten years in sentence along with one year to three year enacting.

However, Brigadier General Zaw Min Tun, the Secretary of Tatmadaw (military) Information refused those said so and he added that it is not absolutely impossible to suit against the accused so as to have heavy penalty rather than in accordance with their perpetrated action.

The numbers of suspects allegedly charged with Counter Terrorism law have reportedly reached over a hundred in Rakhine State including two monks from Mrauk Oo and Ponnagyunt townships respectively while they both were arrested in Kyauk Taw, on the way to Sittwe along with the monk’s car driver, Kyaw San four months ago.

Both of the monks were charged with under section 871, 872, 3, 6 and 50 as they both were turned out as ordinary men from being monk, said by U Thar Tun, the father of Monk U Nyar Na from Mruk Oo Gandarmar Monastery.

“ Monk U Nyar Na was arrested to take Damasariya Exam on the way. He took into monk since he was twelve and residing as a monk his life through. It makes me surprised that such a monk has been suited with against counter terrorisms law and explosion law including about five cases”, he added.

However, U Aung Than Wai from AFP said that having accused and arresting someone without inadequate evidence is violation of a citizen’s rights and human rights.

He added that, ‘About half of Sittwe people know me even if the whole city’s people know me. Yet, I was unfairly arrested and prisoned. Let alone the people from rural and other area. Arrest without any enough evidence is the ignorance of the existing law. I ‘m pretty sure that is absolute bureaucratic directorship”.