A rally organized by Arakan Youths Union-Japan (AYUJ) was taken place in (kokkal-gijidomae sta) outside of Parliament Building of Tokyo on Wednesday demanding on Japanese Government on providing urgent humanitarian assistance to IDPs from Rakhine State.

‘ IDPs people who displaced due to the fighting between Arakan Army (AA) and Myanmar Army is growing day after day with a lot of requirement . So, we demand the Japanese Government to help IDPs in some ways’ said by Ko Kyaw Than Hlaing, the Patron of AYUJ told Narinja News. 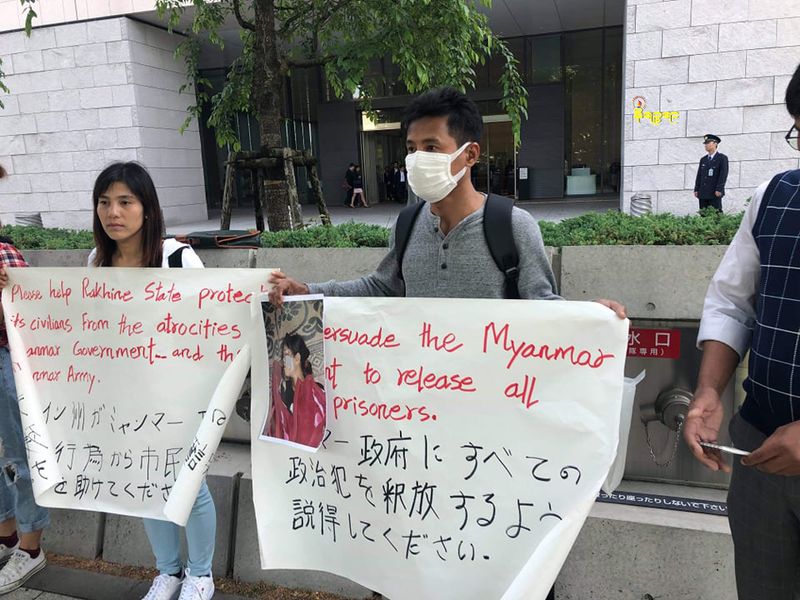 Moreover, the demonstrators called for the international communities to impose possible sections.  He added that ‘ We obviously see that Myanmar Army and the Government are arresting and grudging against Rakhine people while some detainees are tortured more than before with on purpose.Thus, all the arrests and abuses without any reason must be halted at once. And, sections should be imposed by international community by taking actions. That’s why, we did that’.

The protesters demanded two key things in which to provide urgent humanitarian operation to all the IDPs in need by the Japanese Government and to put pressure on the government so as to make strong condemnation on rights abuses and uphold their responsibilities under International Humanitarian and Human Rights Law.

The rally ended at 4:30 local time with 40 Rakhine participants. ‘All the rights abuses on Rakhine people won’t affect anything on the deep commitment to continue supporting the Arakan Aramy (ULA/AA). Arakan Army and the Rakhine people cannot be separated because AA has occupied all the hearts of Rakhine ’ added by Ko Kyaw Than Hlaing.