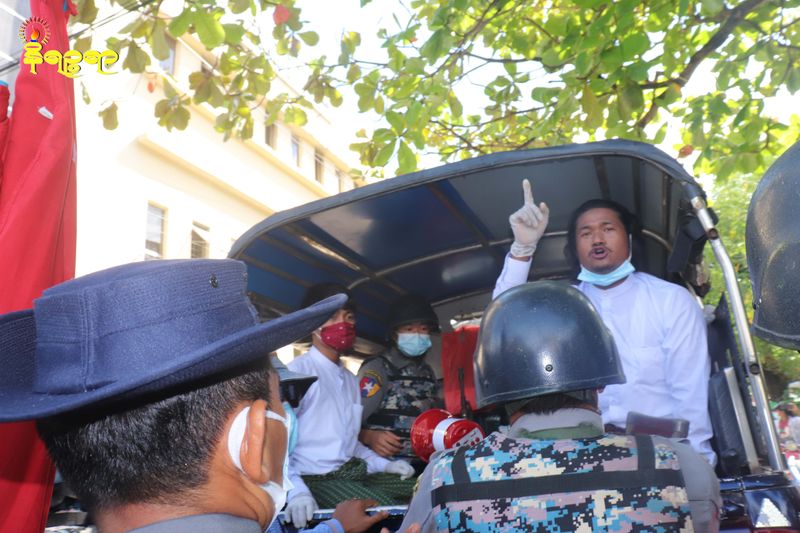 At least four students were arrested by the police as they were leading an anti-government protest in Sittwe, the capital city of Rakhine State, on 19 October.

Around 100 people, most of them were students, marched from the famous Atulamarazin pagoda to the Sittwe streets chanting anti-government slogans.

They also carried anti-government posters, banners, student flags along with Rakhine flags during the demonstration.

"The protests began at around 1 pm. After one hour of march, we were intercepted and arrested by the police near Innwa Bank in Kyay Pin Gyi ward. Soon the crowd was dispersed,” added Toe Toe Aung.

The anti-government protest was tempted with the ongoing conflicts in Rakhine State, where many civilians were killed and more injured to decline the human rights index.

Than Naing, a student leader who was among those arrested, said, “On 9 September, we staged a protest in front of Rakhine State government buildings calling  for an end to the infighting. We also called for an end to the killing of innocent civilians. But nothing happened. So, we have to organize another protest rally again against the government"

The arrested students were brought by the police vehicles and no one has been allowed to contact their families.

The student protest was significant as the fights between the Tatmadaw personnel and Arakan Army members have taken the toll of many civilians and made over 2,00,000 people homeless in Rakhine State.