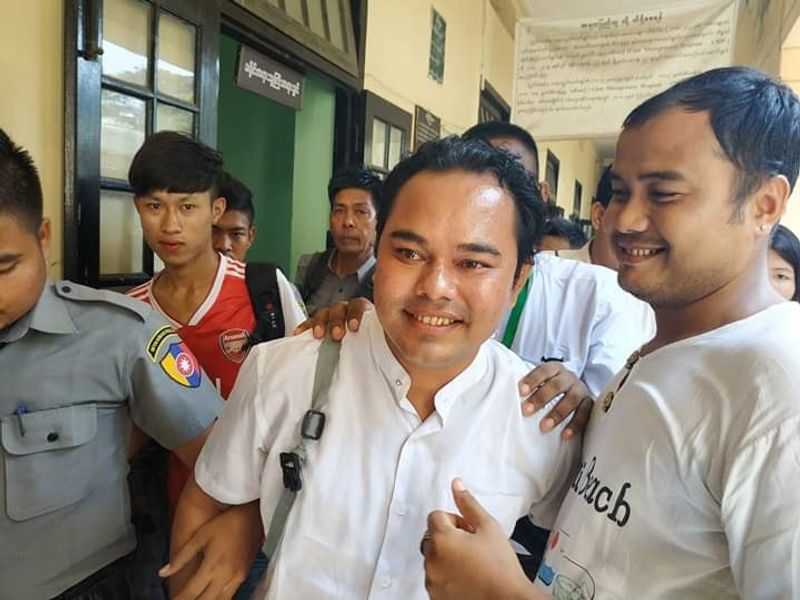 A young social activist, who was arrested in December last year
suspecting his role in the murder of a military intelligence officer,
was released by the Sittwe district court as it did not find any
evidence against Ko Ye Kyaw Thu.

The verdict was passed by the judge of the Sittwe court on 23 September.

Daw Aye Nu Sein, the defender of Ko Ye Kyaw Thu, informed that no
major evidence was produced in the court relating to the murder of Ko
Pho Lon. Moreover, statements from the victim's wife and also
complainants against Ko Ye Kyaw Thu were reportedly too weak.

So the judge decided to release Ko Ye Kyaw Thu  from the detention,
where he was living time for nine months.

Military intelligent officer Ko Pho Lon was shot dead by miscreants in
Sittwe on 25 September 2018 when he was returning back from the night
trope festival with his family members at around  8 pm.

The police arrested four young men suspecting their role in the
murder. However, three of them were released in June last and the
fourth one (Ko Ye Kyaw Thu) got released recently.

“I used to suffer a lot while staying in Sittwe prison for all these
days. As I was never found guilty by the court, can I ask now the
authority about their credibility and also the existence of rule of
law in Myanmar,” said Ko Ye Kyaw Thu.

Over 200 people have been arrested in Arakan for their suspected links
with Arakan Army. Even most of them were already charged under the
anti-terror, criminal, explosion acts.