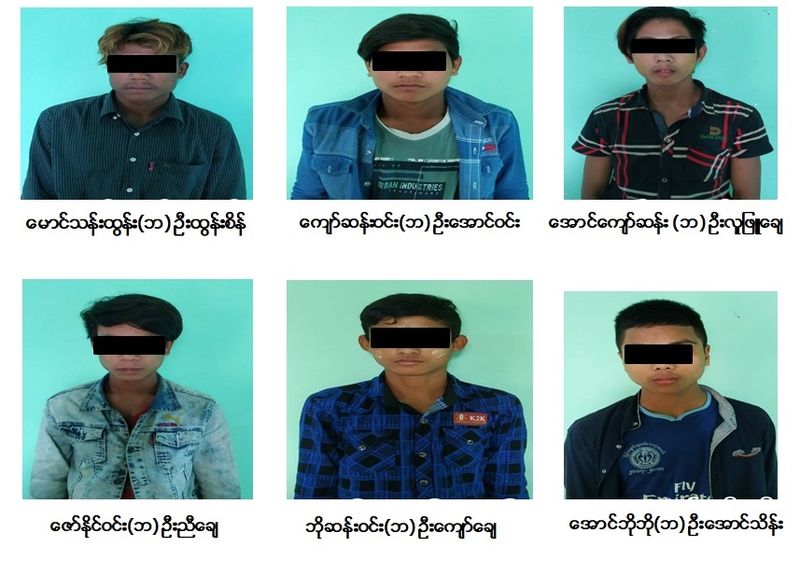 Eleven young men including fourteen and eighteen years old boys have been allegedly detained by Police on suspension of connection with Arakan Army on July 27.

“Eleven arrests have been confirmed when I dialed to township police station. They all are said to be from Rathidaung and Kyauk Taw townships including car driver and driving from Rathidaung and Ahtet Myat Lae village. It is not known yet why and where they have arrested. Police said that the case is still under investigation” U Khin Maung Latt, Amyothar Hluwt Taw Parliament Member from Poonagyut No (3) Constituency said.

U Maung Saw Thann, one of relatives of detainees from Prar Pin Ryinn village said, “ I am now in Ponnagyut to see Maung Nay Lin Tun (18). I have not got the chance seeing with him as the case is under investigation. The family is so concerned about this. The family was informed it.”

Maung Nay Lin Tun (18) is a matriculation student who is currently going to high school while Thein Tun Oo (14) has left out for school as his parents couldn’t effort and he was believed to have been being an IDP who trying to have reunion with his family after the incident of fearful displacement and fighting broke out when Military Navy Vessel was attacked nearby Pyar Pin Ryinn village on July 20.

However, his family felt shocked for not clear arrest over him in Ponnagyut Township.
Although Narinjara News have attempted several times to contact with the police officers, there was no further answer.

Meanwhile, Office of the Commander -in - Chief of Defense Services issued that eight of ten suspects were arrested as they were supposed to join up Arakan Army.

It was mentioned that eight people were about to join up AA insurgents group after being organized and coming from Pauk Taw village of Kyauk Taw township by boat then driving to Ponnagyut by car.

Necessary actions have been made to charge against the suspected eight people along with the car, alleged over connection with Arakan Army and detail incidents are being under investigation in Ponnagyut township police station.